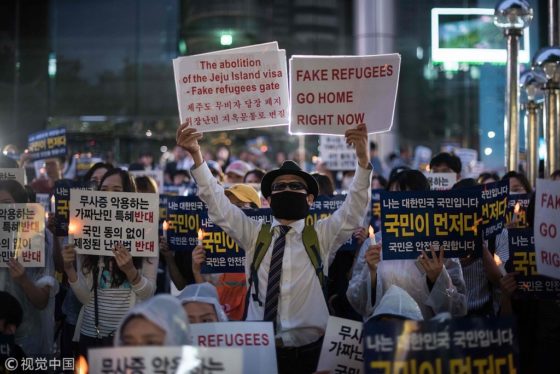 South Koreans are revolting against the arrival of Muslim refugees, with over half a million signing a petition asserting that Muslim migrants don’t integrate and that they don’t want their country to end up like the UK or Germany.

The controversy began when an influx of nearly 1,000 asylum seekers from Yemen arrived on the South Korean resort island of Jeju. They took advantage of a new visa waiver program that allowed people from 186 countries to visit the island without a tourist visa.

This led to 950 foreign nationals, the majority from Yemen, arriving as tourists under a one month permit but then immediately claiming asylum, a process that can take years while they remain in the country.

“And local people here are worried,” said Hank Kim, owner of the Core Travel Agency. “We have all read about the problems that immigrants have caused in Europe — in Germany and France in particular — and we do not want that to happen here.”

Emphasizing that South Koreans do not think the Muslim religion is compatible with their culture, Kim added, “They all have big families and they bring their own culture instead of trying to adapt to the place where they live.”

With officials anticipating asylum claims to double compared to last year, South Koreans are concerned that economic migrants will exploit the system to take advantage of healthcare and other benefits.

Over 520,000 people subsequently signed a petition opposing the arrival of Muslim refugees while around 700 attended a protest march in Seoul on Saturday.

Song Young-chae, a professor at the Center for Global Creation and Collaboration at Seoul’s Sangmyung University and one of the protest attendees, said South Koreans wanted to avoid to same “crisis” that has befallen European countries who opened their borders to mass Islamic immigration.

“We have seen on television just how many problems are caused when a country like Germany or the UK is relaxed about immigration and the damage it does to societies,” he said, pinpointing pedophile grooming gangs and terrorism as two negative side-effects that South Korea did not want to import.

“There are already Muslims living in South Korea, many of whom have married a Korean and been granted permanent residency here, but they still choose to live in their own districts and make no effort to integrate into this society,” he said. “They also attempt to convert Korean people into their religion.”

South Koreans being wary of mass Islamic immigration is unsurprising given the level of animosity generated in Europe by open border policies, where 55 per cent of Europeans now support a total ban on Muslim immigration.