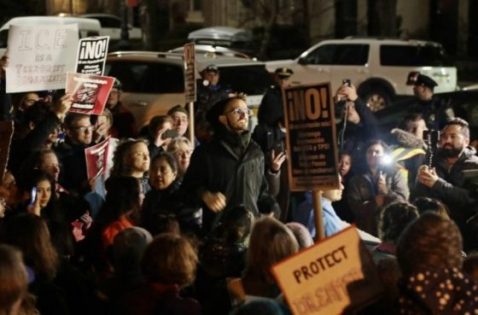 Far-left open borders activists and illegal immigrants came together Tuesday to storm the home of Senate Minority Leader Chuck Schumer after the Democrat finally decided to put the American people ahead of illegal immigrants in voting to reopen the federal government without amnesty for millions of said illegals being included in the funding bill.

The Soros-funded protesters shockingly claimed that DACA itself was no longer good enough and instead demanded amnesty for all of the 12 to 30 million illegal immigrants inside the country as well as those already locked up in detention centers for entering the country illegally. In other words, full on open borders with no restrictions.

The group, “United We Dream” went as far as to block off streets in Brooklyn as they moved to surround Schumer’s home to demand what would amount to the end of the country as we know it, which just so happens to also be the goals of their benefactor, George Soros himself.

The protesters called for a “new” Dream Act which they apparently hope will include all illegal aliens residing inside the country.

“We are not politicians we are activists and it’s our job to demand action… the #Dreamers who are going to lose their status are going to play a short game with disastrous consequences. We will call @SenSchumer everyday!” – @bkindivisible #DreamActNow pic.twitter.com/8E5hhV7clm

Our organizer Patricia says we will not stop until we have a clean Dream Act because we are ALL immigrants! ✊?#DreamActNow pic.twitter.com/3uzXsM4e86

Keep in mind, just flat out giving amnesty to upwards of 30 million illegal immigrants in the U.S. would have a transparent and immediate negative impact on the very people the Democratic Party used to pretend to represent before most shifted towards a globalist, anti-American agenda.

Giving amnesty to 12 to 30 million illegal aliens in the U.S. would have an immediate negative impact on America’s working and middle class, specifically black Americans and the white working class who would be in direct competition for blue-collar jobs with the largely low-skilled illegal alien population.

Additionally, under current legal immigration laws, if given amnesty, the illegal alien population would be allowed to bring an unlimited number of their foreign relatives to the U.S. with them. This population could boom already high legal immigration levels to an unprecedented high. An amnesty for illegal aliens would also likely triple the number of border-crossings at the U.S.-Mexico border.

The illegal aliens stormed the Democrats’ and Rubio’s offices after White House Press Secretary Sarah Huckabee-Sanders encouraged the open borders activists to take their discontent with Democrats and the Republican establishment straight to the politicians themselves.

One has to wonder how many liberal politicians will bow to the demands of these hard-left open borders supporters and how many will actually decide to work for the American people they were elected to represent in the first place?