Solar Storm Will Strike Earth This Week: Here’s What You Should Know 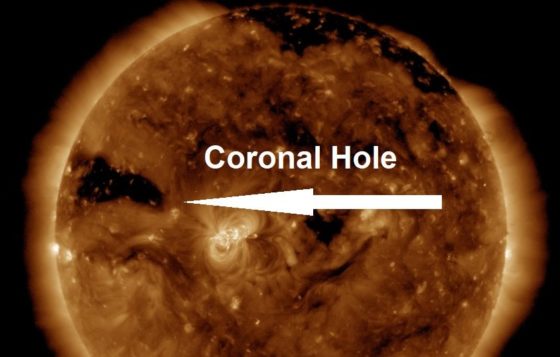 A solar storm is scheduled to strike the Earth later this week.  Although the Earth will be struck directly, the storm is minor, G1, and not expected to take down entire power grids, but weak grid fluctuations may be possible.

It has been stated before, grid failures are possible due to major changes in the sun, this time, once again, it looks like there won’t be much concern though. The Space Weather Prediction Center (SWPC) has warned that the minor storm will strike Tuesday and Wednesday pelting the Earth’s atmosphere with solar particles.

The National Oceanic and Atmospheric Administration (NOAA) issued a G1 (minor) geomagnetic storm watch for Tuesday and Wednesday. The storm watch was issued “due to the arrival of a negative polarity coronal hole high-speed stream,” SWPC explained in a post online Sunday.

C. Alex Young, associate director for science in the heliophysics science division at NASA’s Goddard Space Flight Center, wrote in a report published Monday that at least three “substantial” coronal holes — which demonstrate the Sun’s magnetic field is exposed — were observed in the Sun last week. “These are areas of open magnetic field from which high-speed solar wind rushes out into space,” Young explains. “This wind, if it interacts with [Earth’s] magnetosphere, can cause aurora to appear near the poles.”

But there are a few more things to know about this and future solar storms.

Magnetic storms on the surface of the Sun can cause what are known as “solar flares.” “A solar flare is an intense burst of radiation coming from the release of magnetic energy associated with sunspots,” according to NASA. “Flares are our solar system’s largest explosive events.” If the storm is strong enough, it will cause a coronal mass ejection (CME). “[CMEs] are huge explosions of magnetic field and plasma from the Sun’s corona,” the SWPC explained. “When CMEs impact the Earth’s magnetosphere, they are responsible for geomagnetic storms and enhanced aurora.”

These holes allow solar wind to escape the Sun and enter space.  “As the CH HSS begins to arrive at Earth, solar wind speed and temperature increase, while particle density begins to decrease,” NOAA says.

So what will happen here on Earth? Regions may notice weak power grid fluctuations, though that’s unlikely to happen in this “minor” storm. Minor damage to Earth-orbiting satellites,”especially those in high, geosynchronous orbits” could occur, NASA says but it isn’t likely this time.  High-frequency radio waves could also be “degraded,” NASA adds.

Although a power grid failure is unlikely during this solar storm, preparing for a grid failure should be an important part of every prepper’s survival plans. Knowing where to begin can often be daunting, but a good place to start would be with the book titled The Prepper’s Blueprint.  It will walk you through a basic plan and help you begin your survivalism journey in a way that works for you.