This Tweet Is EXACTLY Why Trump Won The Election: Snowflake Editor Of Mother Jones Freaks Out Over “TOMAHAWK” Missile 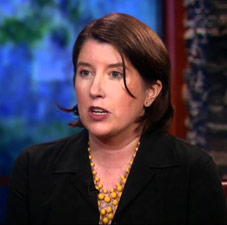 Snowflakes have been freaking out a lot all over America and it seems like there are so many triggers for these people that we’ll never find a safe space big enough for them to all fit into.

Wearing red, white and blue and giving literacy tests to teachers are now both considered racist.

Dreadlocks are an appropriation of black culture and white girls have been ordered to stop wearing hoop earrings.

Within that context (and only that context), it made total sense when the liberal editor of Mother Jones magazine suggested that native Americans should be outraged because the U.S. military’s long-range, subsonic missile system is referred to as the “Tomahawk Missile.”

Of course, Ms. Jeffery wasn’t the first to freak out about appropriating Native American culture in the U.S. military. According to the Washington Post, there are a number of different “slurs” being used by our armed forces.

Some of those include:

And of course, the Navy Seals who killed Osama Bin Laden did so under a mission codenamed…. “Geronimo.”

Jeffrey’s ridiculous comment was met with a barrage of replies from the Twitter-verse:

Only those looking for a reason to be pissed off. It’s tribute not mockery. https://t.co/wYAk08PMWN

@ClaraJeffery The winner for the most F’N stupid comment I’ve heard this week. Landslide victory!

@thepacketrat @ClaraJeffery A load of liberal revisionist bison dung, as is myth that Native Americans were peaceful people until Colonialism.https://t.co/XxocxYgiqF

@ClaraJeffery Metal tomahawks were based on the British Navy’s boarding axes. They’re as white as NPR.

@ClaraJeffery I don’t think many Native Americans are snowflakes.

@ClaraJeffery Oh my gawd I thought this was a joke… then i saw your Twitter page and realized you are actually serious. Seek help.

@ClaraJeffery I served in the 1/501 Parachute Infantry Regiment; the Geronimo Battalion. We were proud to represent our Native American Warrior Brothers.

@ClaraJeffery Just when I thought the stupidity bar couldn’t get any higher you come along and knock that shit out the park!

@ClaraJeffery A lot of Jefferys must be enraged by this stupidity.