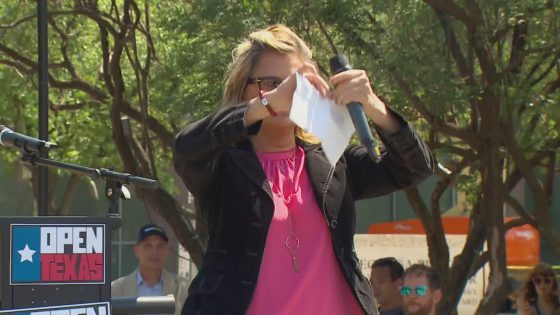 Salon owner Shelley Luther rips up a citation from the police state for defying tyrannical orders to close her business.

Not only has one salon owner refused to close, even after a citation from the overbearing police state we’re being subjected to, but she also said she’s not paying the fine and ripped up the citation in front of 100 people.  Which was also in violation of totalitarian “social distancing” commands.

This is exactly what needs to happen all over the United States, and the world.  We need to come together, and live freely so the tyrants who think they can control us continue to lose power. We’ve said it before, this is the only option. Protesting is simply begging those who put the chains on you to take them off. Disobeying is breaking those chains yourself.

We should have all seen this coming.  People are finally waking up, but it needs to happen faster if we want to avoid complete totalitarianism and poverty.

Standing up to tyranny and the police state takes courage, but there’s true power in it. In Dallas Texas, hair salon owner Shelley Luther was issued a citation but she still refused to close her business. She had two stylists and a nail technician on duty, a fraction of her normal staff. Several supporters came to the salon, including a man carrying a long gun he made into a pole for a Texas flag with a coiled snake on it reading “Don’t Tread on Me,” according to propaganda outlet, ABC News. Luther went on to rip up her citation:

“The right to open up in a safe manner, that should be our right,” said Matt Brice, owner of Federal American Grill in the upscale enclave of Hedwig Village. “We shouldn’t be told we have to shut our business down.”

In Auburn, California, hair salons have also defied orders to shut down their businesses and impoverish themselves. “I have to do what I have to do. I’m fighting to provide for my children and myself and my family right now,” explained Curtis. “It’s been very hard. I’m pregnant. I have children at home,” said For Clip Cage owner Breann Curtis. After losing thousands of dollars, Curtis told FOX40 that it was time to take a chance and reopen.

She was forced to close her shop in March meant she could no longer work to support her family, missing out on thousands of dollars in lost income.

It’s never easy to take a stand against tyranny, especially because they often employ the threat and use of violence to keep their slaves in line.  Anyone caring for their basic human rights should support those who are disobeying the tyrants.  The goal has been impoverishment, and that’s become apparent.  This was never about health, but total and complete enslavement.

People all over the country are standing up in defiance of tyranny.  Hopefully, the powers-that-shouldn’t-be get the message soon that we are not their cattle. We are not their slaves. We are free human beings capable of living without them.  We don’t need them. They need us, and Americans everywhere are removing their consent to be governed.

Business owners everywhere are starting to figure it out! It’s past time to rise up, and get off your knees!