Everybody knows it will not be a straight line going up so we have no reason to GET DISCOURAGED, but it’s just so easy to recognize when the manipulation criminals in London and New York City are at work since gold dumps FOR NO PARTICULAR REASON on insane volume.

We can strike back by making sure investors understand the LONG-TERM game of accumulating the metal. 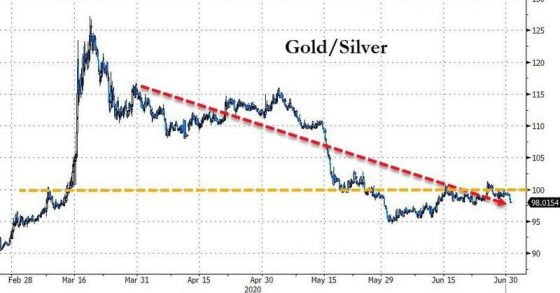 The gold/silver ratio going back below 100 is proving that there’s a STRONG TREND in place. This is no longer just gold decoupling from silver, but a TANDEM MOVE.

I want to spend the rest of today’s letter as we approach the 4th of July holiday recapping some of my takeaways from 2020 as the entire globe went through the first-ever TELEVISED PANDEMIC:

What I’ve realized is that I can’t be an EXPERT on more than a few unique topics, which I’m better served at knowing on a world-class level rather than be a person who FALSELY CONSIDERS himself educated on matters after reading about them.

It’s much more social and humbling to suppose that there are MANY UNKNOWNS and to be a questioner when coming into a discussion or meeting than to appear to be WELL-VERSED.

In this age of abundant content, any topic has hundreds of bloggers covering it from all angles, therefore the REAL SKILL is in developing a system of reaching the truth QUICKLY AND EFFECTIVELY.

Think of the way you treat information, question it, and dissect it.

Don’t shy away from listening to both sides of an argument and AVOID GENERALIZATIONS at all costs.

There are very few BLACK AND WHITE issues.

Becoming a great judge of the profit motive behind people’s commentary is the RARE TRAIT you want to master. The art of GETTING INTO the other person’s mind and thinking about matters from their point of view is TRUE GENIUS.

This is all wrong; we grow by letting go of unproductive habits, beliefs, and opinions.

Learning that an idea you had is incorrect is a cause for delight – it is not part of your identity to know everything, but to MOVE FORWARD.

We evolve by learning new things and we can only do that by ADMITTING FAILURE.