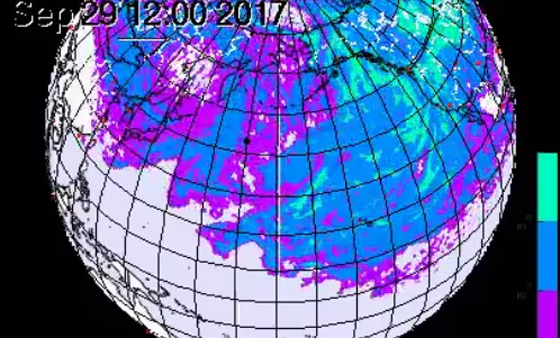 A scientist tasked with monitoring the proliferation of nuclear weapons has published what he described as a “rough simulation” of what would happen if North Korea follows through with threats to test a hydrogen bomb over the Pacific Ocean.

The upshot of the simulation – which was published by Lassina Zerbo, the head of the Comprehensive Nuclear Test Ban Treaty Organization – is that such an “atmospheric burst” could spread a “radio-isotope cloud” of radiation across the planet, potentially leading to the catastrophic loss of life.

Simply a rough simulation of potential cloud that cld carry isotopes! In response to specific inquiries and nothing more.

To be sure, some criticized the graphic as misleading, arguing that such a test probably wouldn’t lead to a world-wide cataclysm.

A Harvard PhD professor said that people “will confuse it with the kinds of fallout clouds they are used to reading about” the “shelter in place for two weeks kind.”

They will confuse it with the kinds of fallout clouds they are used to reading about, the “take shelter for 2 weeks” kind. pic.twitter.com/JEvIhbe97L

US President Donald Trump warned earlier this week, North Korea’s nuclear weapons threaten “the entire world with unthinkable loss of life,” adding that the US has several “devastating” military options to choose from in dealing with North Korea.

Last week, North Korean Foreign Minister Ri Yong-ho told the UN General Assembly in New York that the US had effectively “declared war” on North Korea, and that the isolated country wouldn’t hesitate to retaliate with a nuclear strike. Since then, there have been reports that the North could be planning another show of force – and possibly its seventh nuclear test – to coincide with a local holiday next month.

According to Ri, the “most powerful detonation of an H-bomb” would be one of the North’s “highest-level” actions against the US, as Russia Today reports.

“It could be the most powerful detonation of a hydrogen bomb in the Pacific,” Ri told Yonhap while in New York. “We have no idea about what actions could be taken, as it will be ordered by leader Kim Jong-un.”

North Korea completed its sixth successful nuclear test earlier this month when it tested what’s believed to have been a hydrogen bomb. However, it’s unclear if the country has developed a thermonuclear warhead small enough to fit inside the tip of one of it’s ICBMs. Monitoring groups estimate the explosion caused by the Sept. 3 test was 16 times the size of the bomb that destroyed Hiroshima.

Yesterday, China announced that it had ordered all North Korean businesses operating within its borders to close, part of its obligations under the latest round of UN Security Council sanctions that were passed earlier this month.

Ultimately, Russia and China have called on both the US and North Korea to sit down for diplomatic talks. The two countries even proposed a peace plan where North would agree to suspend its nuclear and ballistic missile tests in exchange for the US halting its military drills with the South Koreans. However, neither the US nor North Korea have expressed much interest in talks.