This article was contributed by Lior Gantz with Wealth Research Group.

September has been HARD to STOMACH; the NASDAQ 100, S&P 500, and the Dow Jones Industrial Average have all been THROUGH THE WRINGER. A proper correction is in place, just like we’ve been WARNING ABOUT since the end of August.

There are COUNTLESS money managers, who RETAIN THE VIEW that there’s so much more selling in the coming months that it is becoming apparent that we’re actually in a BUYING OPPORTUNITY.

I want to show you why I’ve been BUYING THIS DIP: 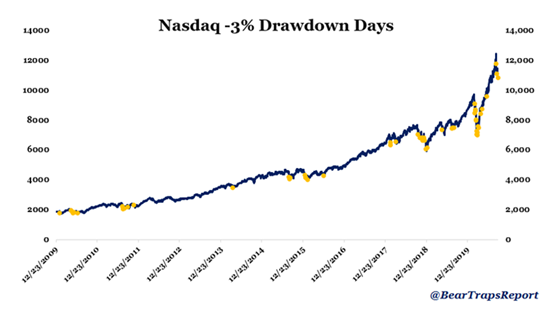 As you can see, the NASDAQ 100 has seen its FAIR SHARE of big down days, but the trend is VISIBLY BULLISH; I don’t see a reason to believe that this index has entered a rough patch – the companies that comprise it are GROWING and this is normal action for the past two years.

This sustained bull market won’t go on WITHOUT VOLATILITY, though, since now there are hundreds of thousands, IF NOT MILLIONS, of new traders. That means QUICKER sentiment changes and people flipping ON A DIME.

I am staying focused on the big-picture FUNDAMENTALS, which are driving the BULL MARKET: 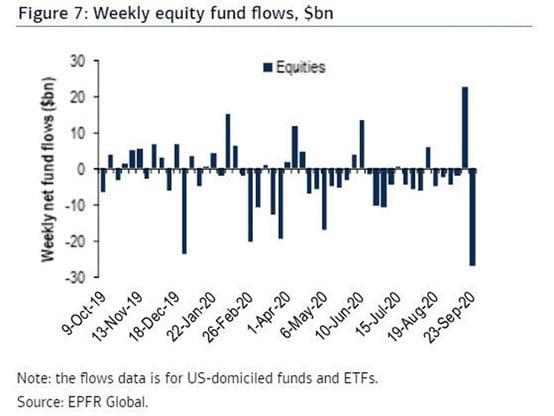 A RECORD AMOUNT of money has exited stocks in the past week, so if you’re STILL IN CASH, waiting for further discounts, know that you’re PLAYING WITH FIRE, since you may not get a chance to enter at a better price.

In Europe, where quarantines are being attempted again, the general population is LASHING OUT, letting politicians know that it’s time to learn to live WITH COVID-19, not to close everything down like in March and April.

The consensus towards accepting the fact that this pandemic will continue costing lives, but that there’s a NEED FOR BALANCE as well, is coming to the forefront.

You can save the people who are at risk by isolating only them, taking care of their health and well-being by various means, while the economy stays open.

The GDP shrinkage has been DEVASTATING for small businesses; I’m stunned at how households that have LOST EVERYTHING are behaving in a very civil manner, but I don’t expect this politeness to last much longer.

There are REAL VICTIMS here, financially speaking, who have lost their whole livelihood. 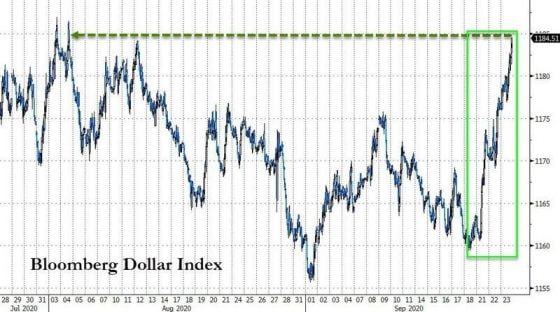 The dollar index, which is going back up to JULY LEVELS (two-month highs), before gold’s and silver’s INCREDIBLE MOVES, is indicating that the euphoric mania of the summer has come to a close.

That doesn’t mean a new one isn’t starting, though.

In other words, buying certain stocks, after they’ve fallen by 20%-30% in ONE MONTH, isn’t a bad idea (maybe half a position).

Silver is the MOST SUSCEPTIBLE to the strength of the dollar; you can look at its chart and tell that a new POWERFUL RALLY could spark shortly: 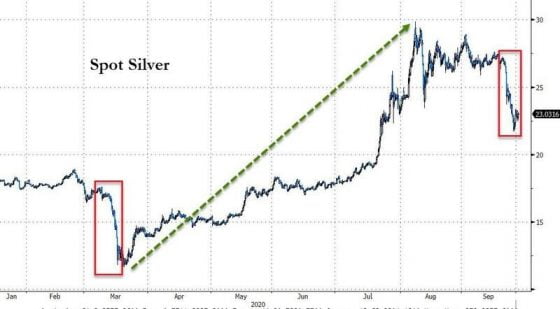 In March, after a similar-sized clobbering, it proceeded to DOUBLE in five months!

I’m not sure that’s in store right now, but I do know we were probably handed an opportunity that will not REPEAT ITSELF too often.

The trend hasn’t changed: negative rates, no sign of higher bond yields, and perhaps even INFLATIONARY PRESSURES. Gold and silver have a long racetrack in front of them.