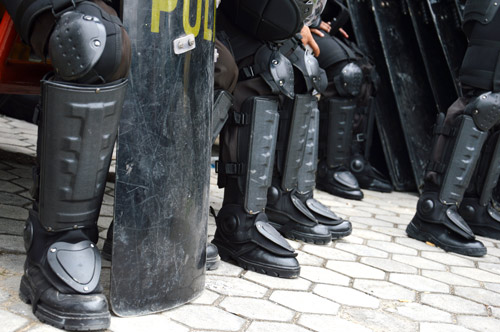 This article was originally published by Joshua Krause at Tess Pennington’s ReadyNutrition.com.

Tess is the author of the highly rated Prepper’s Blueprint: A Step-By-Step Guide To Prepare For Any Disaster

If you pay attention to the news at all, it probably seems like the world has been fraying at the edges lately. In South America, Brazil’s economy is crumbling and Venezuela is on the verge of collapse. In the United States, riots are expected at the Republican National Convention later this month. In Europe, the Brexit vote is threatening to tear apart the EU and the UK.

Obviously, this state of affairs can’t continue indefinitely. There is a flashpoint somewhere down the road, when the people of the world reach their breaking point, and the elitists who run their societies will do everything they can to hold onto their power. It’s going to be ugly, and it’s going to be global in scope.

The governments of the world clearly know what’s coming. That’s why they’re stocking up on riot gear at an unprecedented rate. We know this because globally, sales of riot gear are rapidly growing.

Currently, the market is dominated by North American companies, due to technological advancement and growing fears of terrorism and civil unrest. The report forecasts, however, that over the coming years, Asian-Pacific and Middle Eastern markets will grow at the highest rate. Current popular products for handling unrest without inflicting lethal harm include offensive and defensive weapons, electromagnetic and sonic weapons, kinetic impact weapons, chemical agents, and more.

Of the weaponry available on the market, directed energy weapons (a subset of offensive weapons) is projected to grow at the highest rate, including what are termed active denial systems (ADS) or “pain rays.”

And that’s not all. Wealthy Americans from Chicago to the Silicon Valley are buying rural compounds that they can escape to if civil unrest occurs. Companies that produce luxury bomb shelters are seeing widespread interest, and the wealthy who are still living in major cities are building panic rooms in their luxury apartments.

Clearly, the people who are in the know are getting ready for something big. The elitists who run the governments of the world are hunkering down. They’re preparing their police forces to deal with widespread civil unrest, and they preparing to protect themselves as well. The only question that remains is, are you ready?