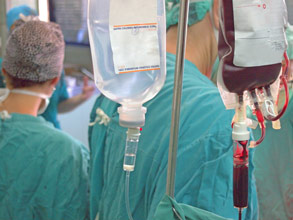 (Pictured: Emergency room waiting area under regular conditions. How will hospitals manage and isolate the influx of patients that would storm hospitals in the middle of an Ebola outbreak?)

Despite numerous procedural missteps over the course of the last several weeks, the Centers for Disease control want the American public to believe they have everything under control.

But with a second case now being confirmed in Dallas, one can’t help but consider that these so-called ‘protocols’ set forth by the CDC are either inadequate, or they are being wholly mismanaged.

Where were the Hazmat suits for the police officers and clean-up crew that were first to arrive at Duncan’s Ebola-stricken apartment? Or what about the ambulance that carried numerous patients and personnel for 48 hours after Duncan was dropped off at the hospital before anyone realized it needed to be isolated? Or how about the quarantine procedures, which left Duncan’s extended relatives in an apartment with no established procedure for  supplying the detainees with food? And why were others who were living in apartments adjacent to these, who had close proximity to  Duncan’s ventilation systems, not moved?  Moreover, why did the Obama administration wait almost two weeks before suggesting that we should be screening passengers arriving in the United States from flights originating in Africa?

These are just a handful of the inconsistencies which suggest, among other things, that the CDC was caught completely off guard and unprepared.

But if that’s not enough to convince you that we have a serious problem with emergency response protocols for pandemics and outbreaks, then perhaps the fact that a single Ebola patient in Dallas overwhelmed the system to such an extent that Texas Presbyterian had to shut down their emergency room to new patients.

The CDC now is recommending that the Dallas hospital, Texas Health Presbyterian, keep the number of workers treating possible Ebola patients to an “absolute minimum,” Frieden said. The agency also wants the hospital to provide a full-time infection control officer to ensure that safety measures are followed with Ebola patients.

Varga did not identify the worker and said her family has “requested total privacy.”

The hospital announced Sunday that its emergency department had stopped until further notice accepting patients brought by ambulance “because of limitations in staffed capacity,” a step known as “diversion.”

“While we are on diversion we are also using this time to further expand the margin of safety by triple-checking our full compliance with updated CDC guidelines,” the hospital said. “We are also continuing to monitor all staff who had some relation to Mr. Duncan’s care even if they are not assumed to be at significant risk of infection.”

The infected woman sought care immediately after her symptoms developed and was placed in isolation at the hospital, Frieden said. (News Observer)

Consider for a moment what something like this might look like if  several cases popped up throughout a major metro area simultaneously. Would all of the hospitals to which those infected with Ebola were taken then shut their doors to new patients?

What this means for you is very simple and it’s something that members of the preparedness community have been warning about since before Ebola was even on the CDC’s domestic radar.

If this virus (or any other contagion) spreads like it did in Africa, our entire health care system will be paralyzed.

This means that whether a person needs medical attention for a viral infection or a broken arm, they will have nowhere to go for help.

Of course, CDC director Thomas Frieden would disagree. Ebola, as he so adamantly stated back in July, is simply not in the cards for America.

We are sure that the medical professionals at the CDC and other government agencies are the cream of the crop. It’s not that they are incapable of doing their jobs. The problem lies at the top of the decision-making hierarchy and one government emergency manager claims that these officials are are not only violating all containment and response protocols, but they are doing so on purpose.

Whether their reasons for this are politically motivated – like causing a panic so they can run GOP-blame commercials – or something even more sinister, they are playing a very dangerous game with the lives of 300 million Americans. Alarmingly, the CDC’s director admitted today that they’ve completely dropped the ball, despite every assurance that they were ready for Ebola. “We have to rethink the way we address Ebola infection control,” Frieden said at a press conference.

This ‘rethinking’ should include real, actionable preventative measures that can be taken by the American public, something the CDC has failed to provide thus far in any serious capacity. Given the (mis)handling of Ebola in the United States thus far, it’s probably about time each individual and family take it upon themselves to establish a pandemic preparedness plan and protocols to deal with this crisis if it continues to spread.

Or, you can just sit back and relax knowing that President Obama has you and your family’s interests at heart while he’s taking a swing on the Back Nine for the 200th time in his Presidency.

The Prepper’s Blueprint: Step-By-Step Guide To Prepare For Any Disaster