Shock Videos: Government Snipers Open Fire On Ukraine Crowds: “War Is Ahead of Us” 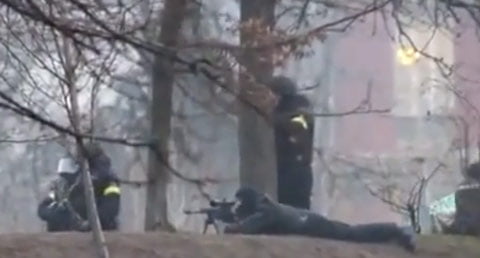 The massive demonstrations in Kiev, Ukraine have been re-ignited. And if you have any doubt about how far a government will go to protect its interests then watch the following videos.

As we saw in Egypt, when people hit the streets and threaten to topple those in power, the government will stop at nothing.

In the Ukraine, the government has reportedly deployed sniper teams. It’s not clear whether or not they are firing rubber bullets, but reports indicate that, at least in some cases, they are using live ammunition. In response, anti-government sniper teams with hunting rifles have taken positions to target police and military operating in the city’s main square.

From Reuters via Zero Hedge:

Activists who recaptured the square, known as Maidan or “Euro-Maidan” to the opposition, appeared to lead away several uniformed officers. Dozens of wounded protesters were being given makeshift first aid treatment in the lobby of the Ukraine Hotel, where many foreign correspondents are staying.

Reporters said there were bullet holes in the walls and windows of the hotel overlooking the square. Both sides have accused the other of using live ammunition.

“Black smoke, denotations and gunfire around presidential palace … Officials panicky,” tweeted Polish minister Radoslaw Sikorski to explain the delay in the meeting at Yanukovich’s office, a few hundred meters from the square.

According to anti-government protest leaders in Ukraine, there is no hope of a truce and the situation will likely escalate from here:

Protesters were in a truculent mood despite the overnight lull and columns of men, bearing clubs and chanting patriotic songs headed to Independence Square at 8:30 a.m. (0130 ET).

“What truce? There is no truce! It is simply war ahead of us! They are provoking us. They throw grenades at us. Burn our homes. We have been here for three months and during that time nothing burned,” said 23-year-old Petro Maksimchuk.

“These are not people. They are killers. Sanctions will not help. They all should be sent into isolation in Siberia.”

This may be just the beginning for all of Europe. As we’ve seen over the last several years there is much disullusionment with governments throughout the EU.

Here in the United States, where Americans own some 300 million firearms, the military and police have been arming up and spending billions of dollars simulating widespread collapse scenarios that include financial panic and the potential for riots that could follow a complete meltdown.

What we’re seeing in the Ukraine right now will be a picnic compared to how it will go down on the streets of America.