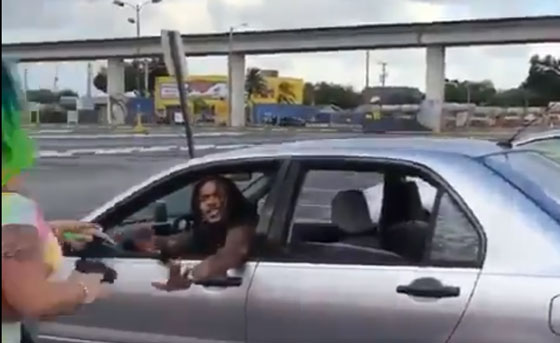 Another day, another day of madness.

Though its legitimacy is currently in question, the video below depicts a woman who appears to be upset at her child’s father for cheating. With the passenger next to her apparently recording for a live audience, the rainbow-hair colored driver pulls up to her purported boyfriend’s vehicle and busts him with another woman in the car.

The man puts his hands up to try and calm the woman but she’s having none of it and pulls the trigger.

The crazy thing? Her child is in the back seat of the car witnessing the events play out as his mother shoots his father.

Rather than being concerned with the state of her love interest’s life, she quickly says “Yo, don’t put that shit on Instagram girl.”

Watch the crazy for yourself:

Damn She Shot Her Babydaddy At The Flea Market For Cheating?? pic.twitter.com/FfmFlXf98r

According to reports, Miami Dade police are investigating the matter: