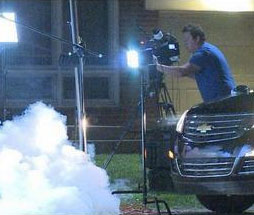 Shocking footage out of Ferguson, Missouri shows that police are deliberately targeting journalists as part of a military-style crackdown that has caused outrage, with even Newsweek acknowledging that U.S. law enforcement is now akin to an occupying army.

The clip shows Al-Jazeera journalists preparing to do a live camera shot of the scene in Ferguson before they are hit with a round of tear gas. The reporters run in the opposite direction. Subsequent photographs show militarized police officers seizing and dismantling their camera equipment as another officer points a sniper rifle at the fleeing reporters.

More proof militarized cops in #Ferguson are deliberately targeting media. This has nothing to do with looters. pic.twitter.com/seRjcYSrUg

It is important to emphasize that this is no longer about looting. The police were AWOL when the looting unfolded on Sunday night. Since that time the looting has all but stopped but the crackdown against peaceful protesters and journalists has intensified.

Two journalists working for the Huffington Post and the Washington Post were also arrested for not leaving a McDonalds quickly enough, as shown in the video below.

Infowars reporter Joe Biggs was also struck by rubber bullets and tear gassed, in addition to having a sniper aim a gun at his head.

St. Louis alderman Antonio French was also arrested and held overnight for the crime of exiting his car. Missouri Gov. Jay Nixon announced this morning that he would visit the town as concerns about wider civil unrest grow.

In arresting, assaulting and intimidating local officials and journalists, Ferguson police are clearly trying to create a chilling effect to discourage media coverage of their brutality and scare other reporters away from covering the story.

The situation in Ferguson is so ominous that even Newsweek is now reporting that America’s police have “become an army” and are “indistinguishable from soldiers,” a chilling acknowledgment given that we were labeled “conspiracy theorists” time and time again for warning about martial law in the past.

By instituting a military-style occupation of the town and aggressively targeting journalists and peaceful protesters, authorities are only increasing the likelihood of further disorder and civil unrest spreading to other areas.

In a related development, the Anonymous hacker group publicly released the name of the officer responsible for shooting 18-year-old Michael Brown and have vowed to release his photo and address if authorities do not respond today.

It’s government re-education time again, and in an effort to support the ongoing Infowar aimed at injecting liberty and truth into the mainstream education system, the Infowars Store is having a limited time 10% discount on all items by using promo code “10”. Click here for more information.