Shock Medical Notice: We Need to Have a “Short 5 Minute PRIVATE Conversation With Your Child” 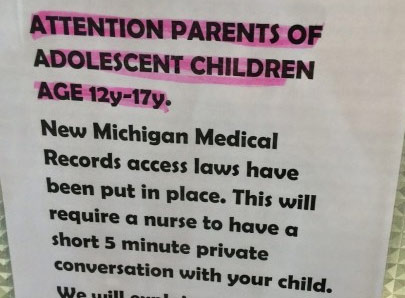 Do the government and its ancillaries have ownership over your child?

Do they have the power to detain and question a child without parental permission?

Apparently they think they do according to a new Michigan medical records access law which reportedly requires doctors to have a private conversation with minors when their parents bring them in for medical care.

This is the notice Christy Duffy saw posted at her physician’s office when she brought her 17-year old daughter in for a minor foot injury. 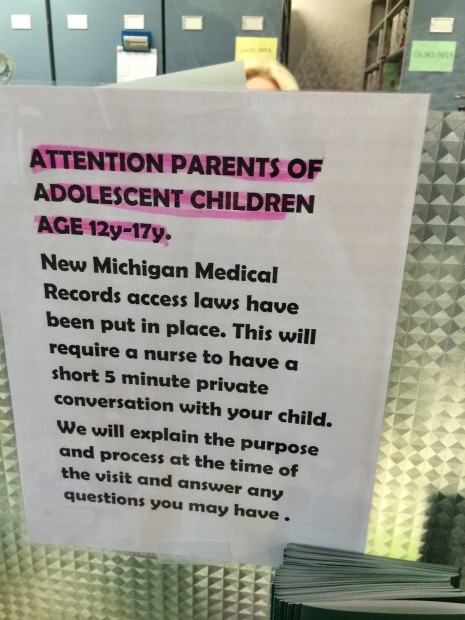 When Mrs. Duffy returned home she penned the following public service announcement warning parents about what to expect the next time they visit their doctor:

Let’s get one thing straight: no doctor or nurse is going to sequester my children in an exam room and talk to them privately. Period. This public service announcement made necessary because of this sign, posted at the check-in counter of my doctor’s office.

I was there last week for an appointment for Amy. She hurt her foot, which makes dancing difficult, so we had to get that checked out. Amy is 17; I asked if this policy was in effect and if so, how could I opt out. The receptionist told me it’s a new law and there is no opting out. Working to keep my cool, I said, “I’m sure there is.” She said, “No, there isn’t.” At which point I asked if I needed to leave and go to the urgent care center because I was not submitting my daughter to such a conversation.

That did not go over well

The receptionist closed the window. Almost immediately, the office manager turned the corner and said, “Mrs. Duffy, may I speak with you?”

She said there was a new policy that would allow a child to access his/her medical records online and the child would be allowed to block a parent from viewing the website. The nurse would also inform my children that the doctor’s office is a safe place for them to receive information about STDs, HIV and birth control. That is what the nurse would be chatting about with my children without any pesky parental oversight.

I kindly informed her that no one would be talking with my children privately, and I needed to know how to opt out of this policy before bringing Amy back for her physical next month. (Yay for physicals! Amy is so excited.)

By this time, the doctor was ready to see Amy so I had to cut the conversation short because I was not letting my girl out of my eyesight or earshot. Not when it was clear that these people were angling to undermine my parental authority.

Does that sound a bit dramatic to you? It shouldn’t. Because that is exactly what they are trying to do.

Make sure this is crystal clear: what they want to do is talk to your child about sex and drugs (maybe rock and roll – who knows?) without your input. Is it really such a stretch to imagine that a doctor who does not value abstinence before marriage would encourage your daughters – as young as 12! – to receive birth control? Is it really such a stretch to imagine a nurse telling a young boy – because a 12 year old boy is a BOY – that she will give him condoms so he can be “safe”? Is this what you want told to your children without the ability to filter the info through your world view?

I am the Mom. I will pick who can talk to my kids about sex and drugs. And rock-n-roll for that matter.

Regardless what health care provider you choose, please know that no one has the right to remove you from your child’s exam room. Perhaps if more of us stood up for our rights as parents, this ludicrous undermining of parental authority might end.

We are living in a new America, one in which officials and their subordinates will stop at nothing to control every aspect of our lives, as well as those of our children.

These kinds of transgressions against personal liberty are being attempted on all levels.

In our school cafeterias children are having their lunches thrown away and being forced to purchase Obamafood pushed through by the First Lady via no-pay/no-food policies.

If your child is diagnosed with a medical condition like cancer and you opt out of traditional medical treatment for fear it will do more harm than good or because of religious reasons the government can usurp your parental rights, take your children and force them to receive experimental chemotherapy.

And, if it were up to the Justice Department, parents who choose to homeschool their children would be deemed criminals, or worse yet, terrorist enemies of the state.

With tens of thousands of laws on the books and more coming, it is only a matter of time before the government will have given themselves permission to do whatever they like with you… and your children.

And if you disagree, protest or fight, they have a heavily militarized domestic police force standing by and ready to rescue your children by kicking in your doors and flash-banging your baby’s crib.

This is the America of the 21st century.