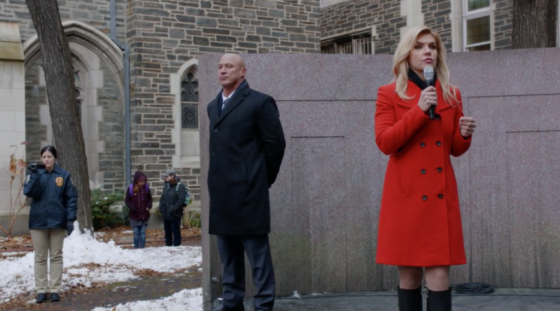 While most conservative Americans are aware of the fact that both Hollywood and the mainstream media outright hate them, NBC has taken it to a whole new level with a recent episode of their highly popular police procedural Law & Order: SVU depicting the violent rape of a conservative journalist whose attacker is eventually let go.

In what is essentially a liberal rape fantasy, the show follows conservative personality Martha Cobb who is seen delivering a speech to a crowd of Trump supporters, depicted as racists of course, that rips liberal snowflakes and their politically correct views.

Cobb’s speech is cut short when a gang of Antifa protesters shows up and begins to clash with the mob of white supremacists. As the violence amps up, Cobb disappears only to reappear in a later scene unconscious in an alley after being beaten and raped by one of the hard-left protesters.

Shockingly, the show then depicts the NYPD detectives tasked with investigating the horrific crime debating Cobb’s political views as if they somehow mattered in deciding whether or not Cobb deserved the attack and whether her attacker should be brought to justice.

The detectives “argue” whether or not Cobb’s opposition to Planned Parenthood and her position on so-called Dreamers led to the attack.

The openly liberal detectives eventually catch the Antifa member responsible for the sexual assault who used a protest sign to “mutilate” Cobb. Cobb not only points out the attacker in a police lineup, his DNA is also found under her fingernails.

Cased closed? Not in the sick world that is liberal Hollywood as the show wouldn’t be complete without a fake white supremacist leader being blamed for the entire thing.

Sadly, in this brave new world that is liberal identity politics, the hate for conservatives runs so deep that NBC felt the need to insert a fake alt-right leader into the show which somehow confuses the case to the point that Cobb’s OWN LAWYER literally gives up and calls for her attacker to be let free.

Interestingly, the fictional female conservative journalist seems to strongly resemble at least two different actual conservative women who have both been highly critical of Antifa while being viciously attacked in the mainstream media.

In an article about the episode, Infowars points to multiple clues that seem to indicate that the sexual assault victim in the show is based on their own reporter, Millie Weaver. Keep in mind that the title of the episode is literally the name of the website that Weaver works for.

NBC’s Law & Order: SVU aired an episode titled “Info Wars” that slanders Trump supporters and depicts the rape of a conservative journalist by an Antifa protester.

The episode, released on Jan. 31, begins at the fictional Hudson University where conservative activist Martha Cobb, who is a direct knockoff of Infowars’ Millie Weaver, is speaking to a MAGA hat-wearing crowd holding Pepe and “CNN is ISIS” signs when a mob of Antifa demonstraters attacks her, cutting the speech short.

From titling the show “Info Wars,” to placing signs reading “CNN is ISIS,” (an Infowars slogan) to mimicking Infowars reporter Millie Weaver, there is little doubt that NBC is demonizing the nation’s leading independent media outlet.

For their part, Breitbart News seems to believe that the female conservative portrayed in the show is actually based on pundit Ann Coulter, a claim that was seemingly backed up by the shows own writer.

On Wednesday, SVU writer Robert B. Cohen responded to a tweet by Ann Coulter. “Timely. #InfoWars,” Cohen wrote in response to Coulter’s tweet about a California city government’s vote to remove a Christopher Columbus statue from city hall.

That’s right, a writer for the show, Robert Cohen, actually CONFIRMED that the episode was about Coulter while claiming that it was “timely” because Coulter is protesting illegal immigration just as the episode came out.

Or, in other words, Cohen just publicly admitted that the episode is based on a sick fantasy that involves conservative women being sexual assaulted for their political beliefs. (Cohen himself is a hardcore anti-Trump propagandist)

To top it off, other actresses who worked on the episode are actually applauding the show for publishing a liberal rape fantasy targeting conservatives.

“Below is an example of Infowars reporter Millie Weaver covering a violent Antifa protest.”