Selco: Moving Around (with Purpose) When the SHTF 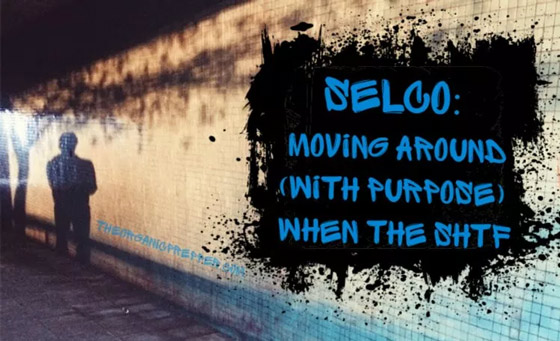 I called this article moving around with purpose when SHTF with clear intention.

So, my advice, it is usually also NOT a good moment to go out without real purpose (or without right purpose) just to “check out what s going on.” In other words, curiosity kills the cat.

It may be hard to resist to check ” what’s going on”, I know it from personal experience, but try to find it out without sticking your head directly in.

It may sound logical that if you hear screams and shots in the middle of SHTF to run there and to check what’s going on, but it is much more logical to stay home and prepare in the best possible way for the cause of those screams to come to you.

Come up with a clear plan of who stands where, who takes who, where are the ways for bugging out, and what each member of your family is gonna do on your mark.

It is an example only, a drastic example, I admit.

An article about moving when the SHTF for a lot of people may be like” I’ll have my gun, my buddies, and drill”, which is very simplyfied, and only part of bigger, much bigger picture.

Routes for moving when the SHTF

When we talk about moving when the SHTF in an urban area, it is impossible not to mention routes and interesting points on our way wherever we go.

Routes may (probably will) be quite different from our regular routes in normal life, so what you need to do today is to sit down and think about it. Let’s call them “alternate routes” through your city or area.

What I have in mind is how you can go from point A to point B using that alternate way. Throw into practice the fact that you are using these alternate ways because you want to avoid people.

Now you need to know that you cannot cover all possibilities because of the nature of SHTF. There are gonna be a lot of new “points” of factors that you did not consider in your exercise.

For example, maybe you planned to use an alternate road through some abandoned storage facility but you did not factor in the fact that the storage facility would become a place for some local gang, or a refugee center or whatever.

What I want to say is that you cannot (as usual) plan for everything, but you can adopt a philosophy of alternate routes in your area.

Every city has alternate routes, even today. When the SHTF it is just gonna become more complicated.

Interesting points along the way

Points of interests or danger spots are everywhere throughout the city. They are in every city in normal times.

So for example, these days in my city there are several spots where I would not like to go through during night time because certain kinds of people live and operate there. If I go there at night, it usually means that I am a guy who wants to buy drugs, a gun or a girl, or I am a policeman or an idiot.

Now that is example of dangerous spot in normal times.

When we are talking about SHTF, there is always gonna be danger spots concerning you moving through the city. The catch is in the fact that those spots may be changing based on a lot of facts.

Here are only few examples, from real experience:

Now, in the beginning phases of SHTF, all of the above-mentioned places should be avoided because simply there will be a lot of violence around them.

Now it is the best advice not to go there because of the violence. But if you feel up to the task of going for example to the pharmacy in the middle of chaos to storm it – it is a very valuable resource.

The choice is yours, but we are talking about safely moving through the city.

In later phases of the SHTF, that gas station will probably become nothing, and the pharmacy too, but the police station and mall might be always dangerous spots, simply because of the infrastructure of the buildings. It may become perfect hiding place for people, or defending place for groups of people.

In the beginning phase of SHTF, a bridge may be a dangerous place because it is a choking point, panic point. In later phases, that bridge may be a place where it is so easy to set up a checkpoint.

All these above are examples only, and they may not work in that way in your case. But the concept will be the same or similar, and it is important to think about that concept today in simple times.

By moving through the area, you are collecting a whole set of information. For example: is the way clear without obstacles? Is there a noticeable human presence in the building in front of you (smells, light, smoke, sounds…), and is it a threat? You will gather a whole bunch of other informations…

At the same time, you are giving information about yourself to someone who is possibly watching you: how you dressed, armed, how you move, hove many of you there are, what are you carrying, etc.

So, keep in mind that it is always a two-direction game and try to adopt that philosophy in your current task.

Let’s say you are going to a trade meeting through the whole city to the other end of it.

Are you going fully and visibly armed through the whole city, or are you crawling through the grass and mud and avoiding everything?

Probably no to both.

You are gonna choose to blend into your current situation based on circumstances around you. So if you are traveling through the region where there are people but they are not hostile, let’s say they are neutral, you are gonna travel through it in a less aggressive way. But you are still giving as little information about yourself as possible. Remember, you do not want to give a reason to not-hostile people to become hostile just because it is clear you are carrying something valuable.

In a region where there is clearly hostility and danger, you will move in a different way and act differently, simply because circumstances are different.

Remember something: showing your weapon is more dangerous than not showing it. It is up to you to recognize at the moment what you are gonna do.

You’ll be more often in situations when you should act and look neutral but ready for violence than to look openly aggressive and violent.

He never stopped learning about survival and preparedness since the war. Regardless what happens, chances are you will never experience extreme situations as Selco did. But you have the chance to learn from him and how he faced death for months.