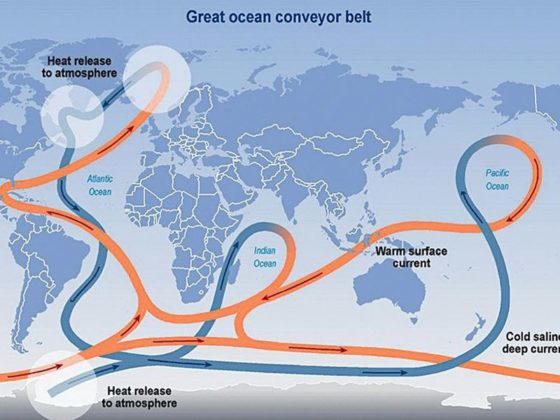 A weak circulation of ocean waters in the North Atlantic could signify that a mini ice age is just around the corner.  Scientists have discovered the weakening currents look similar to those that happened right before the Little Ice Age, a cold spell observed between about 1600 and 1850 AD.

During the Little Ice Age, the Baltic Sea, along with many of the lakes and rivers in Europe froze over. And new and recent studies are showing that the currents in the North Atlantic ocean are at their lowest in 1,500 years.  Scientists are about to blame a mini ice age on climate change.

The research, co-led by Dr. Christelle Not and Dr. Benoit Thibodeau from the Department of Earth Sciences and the Swire Institute of Marine Science, The University of Hong Kong, is interpreted to be a direct consequence of global warming and associated melt of the Greenland Ice-Sheet.

Slower circulation in the North Atlantic can yield profound change on both the North American and European climate but also on the African and Asian summer monsoon rainfall. –The Daily Mail

“The discovery of this new record of AMOC will enhance our understanding of its drivers and ultimately help us better comprehend potential near-future change under global warming,” said Dr. Thibodeau.  “While we could ground-truth our temperature reconstruction for the 20th century against instrumental measurement it is not possible to do so for the Little Ice Age period, added Not. “Therefore, we need to conduct more analysis to consolidate this hypothesis.”

This weakening in the current is still vigorously debated because of the scarcity of long-term record of the AMOC.