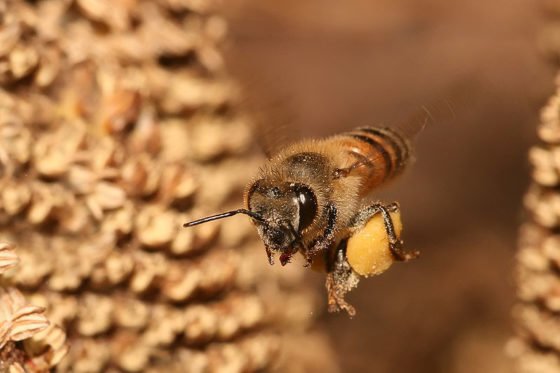 Scientists are sounding alarms that a chemical in weed killer, previously thought safe for animals, is killing honey bees. The global use of infamous Monsanto chemical glyphosate is said to be damaging the “good gut bacteria” of bees.

This latest study was done with the intent to answer a lingering question: why are bee populations are dying, a trend which could devastate worldwide crop production? Between 2016 and 2017, beekeepers in the United States lost 33 percent of their honey bee populations, according to the University of Maryland and Bee Informed. And in the past decade, beekeepers and scientists have been fighting hard to understand a condition known as Colony Collapse Disorder.

Feared at best and considered a useless, disposable nuisance at worst, bees are among the most underappreciated creatures on the planet.

That’s a shame because our very existence relies on the tiny buzzing creatures.

We’ve known for years that bee populations all across North America and Europe are collapsing at an alarming rate. –Ready Nutrition

But now, evidence has surfaced that Monsanto’s weed killer glyphosate appears to destroy the so-called good bacteria in honeybees’ guts, leaving the insects more prone to infection and even death, according to researchers at The University of Texas at Austin.  Newsweek reported that in a study published in the journal Proceedings of the National Academy of Sciences, researchers suggested that because glyphosate can kill microorganisms, it would also be very likely to damage a bee’s microbiome. The microbiome is a term used to describe the bacteria which populate the inside and outside of living organisms, including humans. the microbiome is believed to play a vital role in maintaining health.

Dr. Nancy Moran, Professor of Integrative Biology at The University of Texas at Austin College of Natural Sciences who co-lead the study, said: “Studies in humans, bees and other animals have shown that the gut microbiome is a stable community that resists infection by opportunistic invaders. So if you disrupt the normal, stable community, you are more susceptible to this invasion of pathogens.”

“Right now the guidelines assume bees are not harmed by the herbicide,” said Erick Motta, a graduate student who led the study. “Our study shows that’s not true.” The authors of the study are urging those who use products containing the chemical (from farmers to amateur gardeners) to stop using it with plants which bees might collect nectar from.

To investigate the role the weed killer plays in the depletion of bee populations, researchers collected honey bees with established gut microbiota. They dosed the insects with glyphosate at levels equal to those found in crops, and labeled them so they could be tracked and found again. They repeated their experiments on bees from a different hive.

The scientists drew DNA samples from the bees’ guts. After three days, the researchers found glyphosate had killed off good bacteria in the bees’ digestive systems. That included Snodgrassella alvi, which the authors described as the “core bee gut species.” –Newsweek

The authors also suggest that government agents get involved and regulate the weed killer to prevent more bee deaths.  Instead, there are things we can do as individuals that will be of a greater impact, and more immediate than awaiting government action and bureaucratic paperwork. According to Ready Nutrition, it isn’t all that difficult to help the ailing bee populations in your area and of your own free will!

Provide flowering plants from April through October (early spring through fall). Plant native wildflowers that bloom throughout the year in containers on your windowsill, porch or deck, or in your garden. Since these flowers attract bumblebees and other pollinators, they will enhance pollination of your fruit and vegetable crops too.

Because most queens overwinter in small holes on or just below the ground’s surface, avoid raking, tilling or mowing your yard until April or May. If you do need to mow, do so with the mower blade set at the highest safe level.

Many native bumblebees build their nests in undisturbed soil, abandoned rodent burrows, or clumps of grass. Preserve un-mown, brushy areas and do not destroy bumblebee nests when you find them. Reduce soil tilling and mowing where bumblebees might nest.

Avoid all pesticide use. –Ready Nutrition

Be the change you’d like to see. It is a lot easier to take action on your own to help the bees than wait around for the government to write something down on paper and get bureaucrats gathered to follow through with any kind of plan.