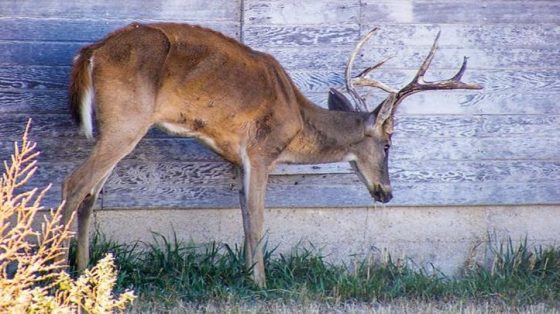 Deer across North America have been dying from a disease which attacks their nervous system gradually destroying it. And now scientists are concerned that this brain-wasting “zombie disease” could spread to humans.

Chronic wasting disease, or “zombie deer disease,” was first observed in 1967 in Fort Collins, Colorado, and has since infected wild herds in 24 states and Canada, as well as in South Korea and Norway, NPR reported.  “CWD passes from animal to animal through prions, misfolded proteins that cause other proteins to misfold around them,” NPR reported. “Different prion diseases tend to only harm certain species, but can evolve to overcome those limitations.”

In some herds, as many as half of the animals carry prions. But direct contact isn’t the only way prions are transmitted.  According to the New York Times, sick animals and cadavers can spread prions through plants and soil, which could be coated with deformed proteins for years, perhaps even decades.  An animal infected with the disease can live for up to two years before showing any signs of symptoms, such as a vacant stare, thick saliva, exposed ribs, or drooping heads.

There have been no reported human illnesses due to the disease, and scientists don’t have conclusive evidence that the infected meat has ever harmed people, suggesting a “species barrier” between humans and deer.

“While most research shows there’s a robust species barrier, this recent study showed that barrier might not be quite as robust as we once thought,” Matt Dunfee, head of the Chronic Wasting Disease Alliance in Fort Collins, Colorado, told NPR. Researchers led by Mark Zabel, associate director at Colorado State University’s Prion Research Center, found that macaque monkeys who ate infected deer contracted the disease. This is the first time the disease was shown to spread to a primate through the ingestion of infected meat.

Zabel and his team also found that the prions involved in the “zombie disease,” which scientists have only known about for 50 years, are probably still evolving, “which leads us to believe it’s only a matter of time before a prion emerges that can spread to humans,” NPR reported.

Mad Cow disease, for example, is a prion disease that rooted from scrapie, a deadly disease that afflicts sheep. Once the prions were passed to cows, the cows developed a prion disease of their own (mad cow disease). And when humans ate the beef from those sick cows, they developed prions in their own brains. As of 2016, according to the Food and Drug Administration, 231 people had died from the condition. -AJC

In an interview with The New York Times, Zabel said he believes the only way to stop CWD is by utilizing controlled burns. “There’s a lot that we still don’t know and don’t understand about the disease,” Zabel also said.

Dunfee told NPR, “if you are hunting in an area where CWD is found, have your animal tested. If it comes back positive, don’t eat the meat.”