School Madness: Students To Be Expelled For Shooting Airsoft Guns At Home 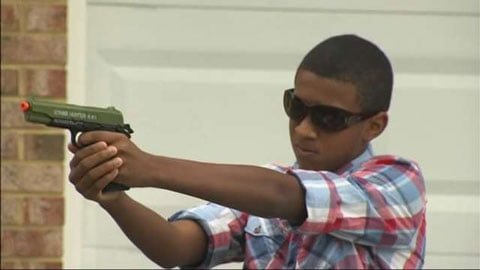 The madness of the government indoctrination machine is no longer limited to school grounds.

With children and teens across the country being regularly suspended for playing with toys that resemble guns or even wearing t-shirts that are suggestive of rebellious or violent behavior, it only makes sense that school officials would threaten students who go against school policies in the privacy of their homes and yards with expulsion.

Not possible you say, because a student’s home is protected by private property rights and is outside of the jurisdiction of any school board or regulation?

In the new America, anything is possible. In fact, given the extent to which the government has expanded their surveillance and regulatory network, it’s not only possible, but highly probable.

According to WAVY TV, a Virginia Beach public school has suspended several students for “possession, handling and use of a firearm.”

Except that the firearms in question are, of course, air propelled plastic pellet guns available for purchase at any local sporting goods store throughout America.

You may also notice that the “firearm” (pictured above – we’re surprised they didn’t refer to it as an “assault firearm”) is a toy, as designated by the orange marker at the tip of its barrel.

And, most importantly, the “students” weren’t actually acting in the capacity of students because they weren’t at school. That’s right, these boys were at home, in their own front yard.

As noted by Steven Watson, a highly alert and hypersensitive neighbor who saw something quickly dialed 9-1-1 to say something:

A neighbor saw them and called in a complaint to police. The caller even acknowledged that the gun wasn’t real, telling the 911 dispatcher “This is not a real one, but it makes people uncomfortable. I know that it makes me (uncomfortable), as a mom, to see a boy pointing a gun.”

Report by My Fox Philly (Video below):

A mother in Virginia Beach is outraged that the city public school system suspended her twelve-year-old son and his friend because they were firing a spring-driven airsoft gun on her family’s private property.

Solangel Caraballo says that the two boys may even be expelled and not allowed to return to the school for at least a year.

The trouble began two weeks ago when a neighbor called 911 to report seeing 12-year-old Khalid Caraballo using the airsoft gun for target-shooting in his yard. The airsoft guns use plastic pellets.

Right around that time, Khalid said he and his friend shot some other friends during “an airsoft gun war,” but says the two boys who were shot weren’t hurt.

“We were in our yard. This had nothing to do with school. I didn’t have anything of this at school. Anytime,” said Khalid.

Somebody needs to contact World Citizen Henry Porter at the London Observer to report this travesty. Perhaps he can convince the United Nations to assemble a military force to disarm the middle schoolers in this country of their right to bear toys.

Or is that how we’re doing things now in the land of the free?