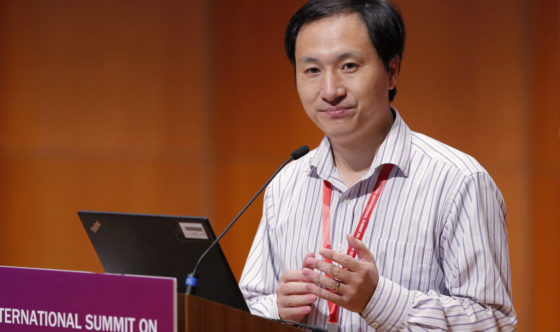 In this Nov. 28, 2018, photo, He Jiankui, a Chinese researcher, speaks during the Human Genome Editing Conference in Hong Kong. He made his first public comments about his claim to have helped make the world’s first gene-edited babies.  (AP Photo/Kin Cheung)

On November 25, young Chinese researcher He Jiankui became the center of a global firestorm when it was discovered that he had allegedly made the first CRISPR-edited (genetically modified human) babies; twin girls named Lulu and Nana. Since the story broke, many have balked at the ethics of such an experiment and He has gone missing.

Antonio Regalado broke the story for MIT Technology Review, and He himself originally seemed unafraid. In fact, He described the experiment in person at an international gene-editing summit in Hong Kong.  The experiment was done, according to He, to help make humans resistant to the HIV (human immunodeficiency virus) for their entire lives by giving them a specific gene capable of doing such.

He Jiankui of Shenzhen, the Chinese scientist claiming to have altered twin girls’ genes, said he altered embryos for seven couples during fertility treatments, with one pregnancy resulting thus far. He said his goal was not to cure or prevent an inherited disease, but to try to bestow a trait that few people naturally have: the ability to resist possible future infection with HIV, the AIDS virus. Although his path is paved with good intentions, many have warned of the dangers of this type of genetic modification.

He said he chose embryo gene editing for HIV because these infections are a big problem in China. He sought to disable a gene called CCR5 that forms a protein doorway that allows HIV, the virus that causes AIDS, to enter a cell. But not all scientists are on board with He’s genetic modifications. –SHTFPlan

It is still unclear if He did what he claims to have done. Nonetheless, the reaction was swift and severe. The uproar over the unproven report of gene-edited births in China has researchers elsewhere worried about a backlash. In this case, the backlash was so severe, that He has gone missing.  According to the San Francisco Gate, He’s employer, the Southern University of Science and Technology in Shenzhen, denied reports that the scientist was detained by any human acting as “authority” or government.  “Right now nobody’s information is accurate, only the official channels are,” a spokesperson told the South China Morning Post. She refused to comment further.

There are only two outcomes to He’s experiment: he was successful, or he was not successful.  Let’s assume he failed miserably and some scientists are correct that he violated ethics rules.  He would have likely already been arrested considering the scientist was far from keeping this experiment a secret.  Let’s now assume he was successful and created human beings that can resist a virus that there is no known cure for, and for which medications help make pharmaceutical companies millions of dollars each year.

This all begs the same question: why would a well-respected scientist go missing if He has already made this public and claimed no wrongdoing? To be fair, this is an ethical gray area. But what if He found a way for humans to resist a virus that can only be treated with very expensive medications provided by Big Pharma? Is that the reason he’s missing?

It makes you wonder…

Can one cure cancer or HIV considering the massive monetary loss to pharmaceutical companies?