The tides have completely turned; if you want to be able to INTERPRET Donald Trump’s latest move, you NEED to understand the delicate dynamics of INTERNATIONAL politics and how DECEPTIVE and sophisticated politicians need to be in order to ultimately PURSUE and ACHIEVE their desired goals.

On Monday and Tuesday, Trump didn’t appear OPTIMISTIC at all. He sounded concerned and he sounded BEARISH, but why?

After first downplaying the COVID-19 disease as a mere case of acute flu, followed by weeks of reassuring messages, he totally CHANGED his tune and is now the most pessimistic of all the people that the Task Force conferences feature.

There are two MAIN reasons for this, chief among them being that he wants MORE stimulus. And in order to get it approved QUICKLY and with less friction, he needs to create URGENCY.

This is textbook politics and what Trump is ATTEMPTING to do is make it IMPOSSIBLE for the average voter to go with the Democrats because what the democrats have chiseled on their flag is an INFRASTRUCTURE PROGRAM and Donald is gunning to rob them of it and make it part of his list of achievements! 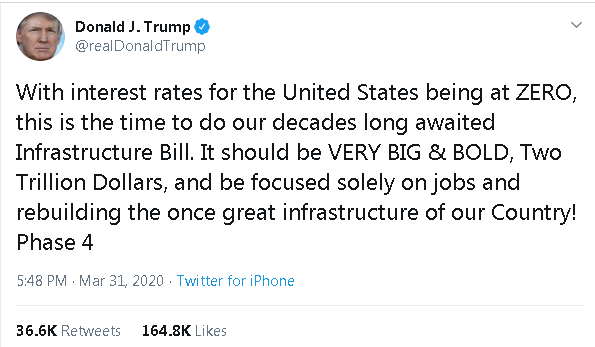 Trump’s WET DREAM has been zero interest rates, which make it possible for a politician to have the MIGHT and the INNOVATIVE genius of the collective business community in the U.S. – the strongest in the world – behind him, while he PUNTS the national debt into the 2nd half of the 21st century.

Compare this to the situation in Europe or Japan, where zero rates and negative rates have done ALMOST nothing to create productivity. This is because the governments have used it for UNPRODUCTIVE social programs and CORRUPT purposes, like increasing their own salaries and terms and for buying votes, by enacting unsustainable social programs. In the United States, an infrastructure program is LONG-OVERDUE and will dramatically boost productivity.

Trump knows that even though the experts THOUGHT that stock market performance was the PRIMARY cause of his popularity, his APPROVAL RATINGS are actually on the rise, while the stock market just underwent its WORST first quarter of a CALENDAR YEAR in history!

Q1 was the worst 90-day period in Dow Jones history. For the S&P

President Donald Trump appears DAILY in the news. COVID-19 is offering a FREE platform that puts him in the spotlight every single 24-hr loop. He is in the voter’s face constantly.

This is the result: 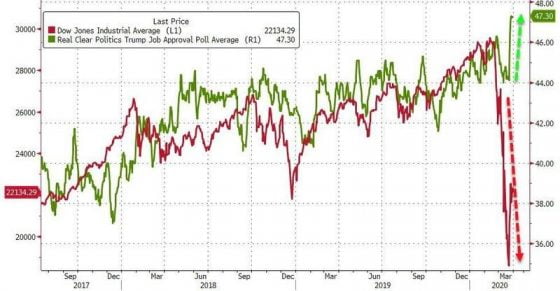 Donald Trump HASN’T stopped caring about the economy; that’s ALWAYS going to be his bread and butter. But he knows that by spooking investors into SUBMISSION, causing the ROUND TWO sell-off that I predicted in both my Sunday and Tuesday letters this week, he can PUSH his infrastructure plan, worth north of $2T, SUPER-FAST.

Trump’s economic team saw the INCREDIBLE rally, which began after the Federal Reserve stopped the panic in the credit markets and after the announced HELICOPTER MONEY, which is already going to make him SUPER-POPULAR anyhow. He then realized that the Treasury could issue a massive 0% BOND, with a 50-yr lifespan that could put hundreds of thousands of displaced workers from the industries that will struggle for years, back to work.

This was an UNUSUALLY short bear market rally, but very sharp, actually creating a new bull market. Don’t let these swings mess with you since they’re ARTIFICIAL. 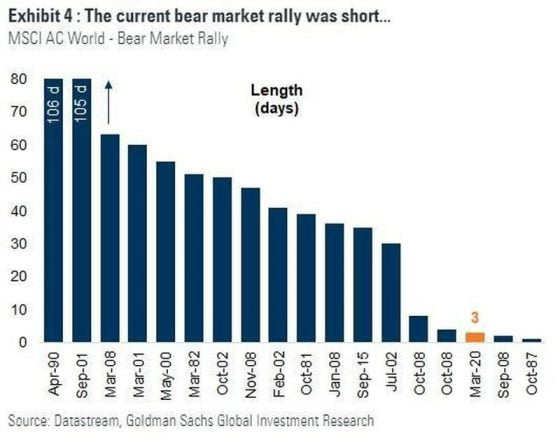 Wall Street, sensing Trump’s game here, is WAITING on the sidelines until this infrastructure program becomes a DONE DEAL. In the meantime, they don’t mind seeing the market BURN for a bit.

Washington and Wall Street are bearish; don’t fight them.

On the other side of this battle, though, lie GREEN PASTURES.