Sanctions, Rhetoric, and Possible Boarding of Vessels vs. North Korea 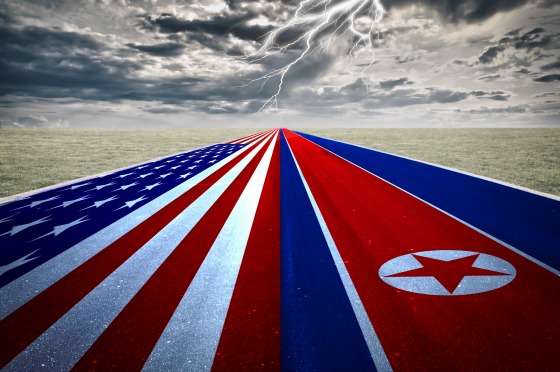 On Friday, 2/23/18, the Trump Administration announced the implementation of even stronger sanctions against North Korea to force it into compliance regarding its nuclear weapons. The New York Times reported on the revised sanctions, and here’s an excerpt:

The measures target 27 shipping companies and 28 vessels, registered in North Korea and six other countries, including China. The Treasury Department said the shipping firms are part of a sophisticated campaign to help North Korea evade United Nations sanctions restricting imports of refined fuel and exports of coal.

President Trump later released the following statement to reporters during a joint news conference with the Prime Minister of Australia as reported by Reuters on Friday, 2/23/18:

“If the sanctions don’t work, we will have to go to phase two, and phase two may be a very rough thing, may be very, very unfortunate for the world.”

That doesn’t sound very positive… “very, very unfortunate for the world” seems to imply something big. Sounds as if it may mean war, and not to one limited between the U.S. and North Korea.

Two of the stated overall U.S. objectives regarding interception of ships by U.S. naval forces is to halt North Korea’s importation of fuel and their exportation of coal. Here’s a statement from a Newsweek article on Friday, 2/23 entitled John Bolton Blasts Trump’s New North Korea Sanctions as Worthless, that describes the planned actions:

“The measures target 27 shipping companies and 28 vessels, registered in North Korea and six other countries, including China,” The New York Times reported on Friday. “The Treasury Department said the shipping firms are part of a sophisticated campaign to help North Korea evade United Nations sanctions restricting imports of refined fuel and exports of coal.”

Well, before that “Phase 2” occurs, it may just need a tipping point…and that venue may have been found with the other proposition: that U.S. Coast Guard vessels may be used to search, and board ships suspected of carrying out trade with North Korea outside of the embargo. They will also search the vessels for any weapons or parts for weapons systems.

Yes, you read that correctly, the U.S. Coast Guard! As if they don’t have enough to deal with in U.S. waters with drug smuggling and illegal aliens, let alone to patrol our waters and protect from foreign naval vessels. Now they’re going to be pressed into service to police vessels in Asia. Here’s another excerpt as reported through Reuters and reprinted in Newsweek from Friday, 2/23 entitled North Korea Sanctions Evaders Beware: U.S. Planning Major High Seas Crackdown, that is “telling” if you study it clearly:

U.S. Treasury Secretary Steve Mnuchin told reporters in Washington on Friday the United States does not rule out boarding ships for inspections. But U.S. officials said privately that such action, especially the use of boarding crews, would be decided on a case-by-case and with utmost caution. Some U.S. officials believe the risk could be minimized if Coast Guard cutters, which carry less firepower and technically engage in law-enforcement missions, are used in certain cases rather than warships.

The Coast Guard declined to address whether it might deploy ships to the Asia-Pacific region but acknowledged its ties to countries there. “Future ship deployments would depend on U.S. foreign policy objectives and the operational availability of our assets,” said spokesman Lieutenant Commander Dave French.

Mnuchin…a banker, and now involved in what amounts to a military operation, if the Coast Guard is even considered. Why would the U.S. Treasury Department be involved in any of this? Then that last “cowed” and perfectly-crafted, politically-correct statement by Lieutenant Commander French, showing that despite the Coast Guard’s mission to be used for the defense of our shores (WWII being an exception for foreign deployment, as we were in the fight for our existence), they will now potentially deploy in the Far East…when the Treasury Department jerks the leash.

Perhaps the Treasury Department will want to “impound” the cargo. It’s a state actor-entity confiscating the cargo, after all…certainly not piracy.

Undoubtedly the “criteria for the case-by-case basis” will be that the CG will board any vessel that will not resist, such as a fishing vessel: if they’re weaker, we’ll board them. The above statement even mentions that the U.S. doesn’t want to use a warship: we’ll go in potentially “outgunned” from the beginning. So, what is the incentive for the vessel to allow the CG to board them, or not to fire upon them?

The potential flashpoint for a false-flag narrative is being created: an “attack on a U.S. Coast Guard vessel” that leads into a war…justification for an attack on North Korea.

North Korea is not going to back down. We know this. We also know that the U.S. is ratcheting up the sanctions and actions. Eventually the tipping point for either side will be reached. Another factor to consider is “Russia-gate” with one man already having pled guilty on Friday 2/23 to conspiracy with a foreign government (that being Russia) against the United States. It will just escalate from there, as we know, whether contrived or whether the charges have any basis in fact.

The questions remain: how far will the (in)Justice Department pursue this, and as it affects the President’s position, will he utilize the military option against North Korea to deflect attention? Time will tell, but once again, we are entering a situation where either side may enter into a conflict to save face. Always at the expense of the average person, and we’ll never find out the facts of who initiated it until long after it occurred.