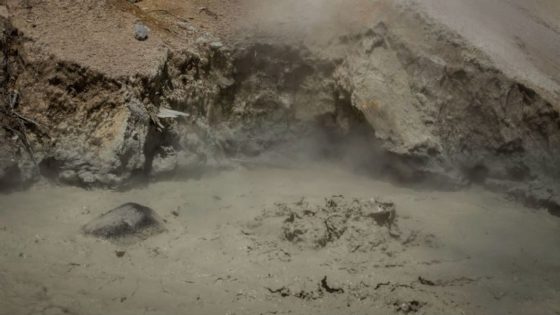 An unstoppable geyser of mud is continuously pouring from the San Andreas fault line and slowly creeping across California. The troublesome mud in California’s Imperial County has caused local authorities to declare it an emergency earlier this year.

It’s called the Niland Geyser, according to Science Alert, and it’s exactly that, a geyser of bubbling mud. But there’s a strange twist – this menacing puddle has been slowly creeping across the ground, to the point where it’s now threatening railroad tracks and a state highway. The Niland Geyser had first appeared in California in 1953 but it sat around without incident for decades. Then, around 11 years ago, things began to change. The geyser started moving across the dry ground at a glacial pace.

But now, suddenly, things are starting to get serious where the mud geyser is concerned. In the last six months, the geyser’s pace has picked up considerably. In just a few months, the Niland Geyser’s mud has traveled 18.3 meters (60 feet). It traveled another 18 meters in a single day – bringing it ever closer to Union Pacific’s railway tracks, State Route 111, a petroleum pipeline, and some fiber-optic telecommunications lines.

The mud has so far traveled roughly 73 meters (240 feet) from where it all began a decade ago. The Los Angeles Times called the mysterious mud geyser a “slow-moving disaster.” However, U.S. Geological Survey geophysicist Ken Hudnut, who visited the moving spring in July, has said there’s no evidence that this is a sign that the “Big One” is approaching. “It’s a slow-moving disaster,” said Alfredo Estrada, Imperial County’s fire chief, and emergency services coordinator. But not because it could cause a massive quake.

Based on publicly available satellite images, the spring hadn’t appeared to move much until roughly 2015, Hudnut said, but the mud’s movement became particularly noticeable earlier this year. The spring in question is actually only about 80 degrees Fahrenheit, Hudnut said. It’s bubbling not from boiling water, but carbon dioxide being created from deep underground the earth’s surface, according to reporting by the Los Angeles Times.

Union Pacific has even built a 100-foot long wall of large boulders and steel more than 75 feet deep in the earth in an effort to protect the railroad. Union Pacific has been forced to build temporary tracks to avoid running trains over land impacted by the spring. Trains are now moving more slowly through the area, according to the company. The railroad may need to consider more permanent solutions in the very near future as well, such as building a bridge to bypass potentially unstable land, a company spokesman said.