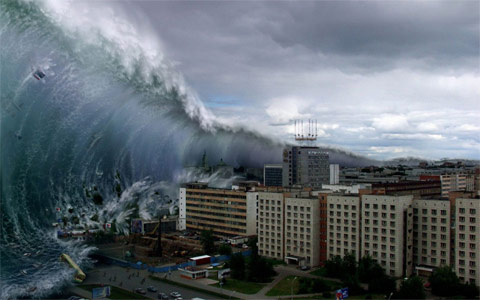 The following article was originally published by Michael Snyder at The Economic Collapse Blog.

While the eyes of the world are on ISIS, Russia is creating weapons unlike anything the world has ever seen before.  Plans for a giant self-propelled nuclear torpedo that can create a giant tsunami more than 1,000 feet tall were recently “leaked by mistake” by the Russian media.  Apparently the warheads on these torpedos are designed to create so much radiation “that everything living will be killed” – including those that try to survive the attack by hiding in underground shelters.  These “robotic mini-submarines” would have a range of up to 10,000 kilometers and would be able to evade all existing U.S. detection systems.  To say that such a weapon would be a “game changer” would be a massive understatement.

I know that you are not just going to take my word for any of this.  So like I do in all of my articles, I am going to carefully document what I am saying.

The reason why we know about the plans for this new nuclear torpedo is because they were displayed on Russian state television for a few moments during a recent broadcast.  According to Russian officials, this was an “accident”.  The following comes from a report in the Independent…

Secret plans for a new Russian nuclear torpedo system have been shown on state-controlled television in what the Kremlin said was an accident.

A close-up of a confidential document detailing “Ocean Multipurpose System: Status-6” was broadcast for several seconds by Channel One Russia and NTV during coverage of a meeting between Vladimir Putin and military officials.

Could it be possible that this “accident” happened on purpose?

Could it be possible that it was intended as a warning for the Obama administration?

But without a doubt, this is the kind of weapon that would keep military planners up at night.  According to RT, this new nuclear torpedo is designed to create “extensive zones of radioactive contamination” that would ensure that no “military, economic, business or other activity” would occur in that area for a very long time…

The footnote to the slide stated that Status-6 is intended to cause“assured unacceptable damage” to an adversary force. Its detonation “in the area of the enemy coast” would result in “extensive zones of radioactive contamination” that would ensure that the region would not be used for“military, economic, business or other activity” for a “long time.”

In addition, Konstantin Sivkov of the Russian Geopolitical Academy told the BBCthat this kind of weapon could be used to create a tsunami more than 1,000 feet high…

As I have written about previously, a whopping 39 percent of all Americans live in counties that directly border a shoreline.  The detonation of just a handful of these weapons could wipe out the entire east coast and kill off a very substantial percentage of the U.S. population.

On top of all that, the BBC is reporting that a state-run Russian publication is suggesting that these new torpedos are being fitted with extremely radioactive cobalt warheads…

According to state-run Rossiiskaya Gazeta, the destructive power attributed to the new torpedo’s warhead would fit the description of a cobalt bomb.

That would be a type of thermonuclear warhead with a layer of cobalt-59, which on detonation would be transmuted into highly radioactive cobalt-60 with a half-life longer than five years.

Such a weapon would guarantee “that everything living will be killed”, the paper said – there would not even be any survivors in bunkers.

A cobalt bomb has never been tested because of the devastating radiation it would unleash.

Worst of all, we would have no advance warning that these torpedos were coming.  They can be launched from anywhere, they reportedly have a range of up to 10,000 kilometers, and they are designed to “avoid all acoustic tracking devices and other traps”…

It was developed by Rubin, a submarine design bureau in St Petersburg.

It would, apparently, be launched by nuclear-powered submarines of the 09852 “Belgorod” and 09851 “Khabarovsk” series.

Rossiiskaya Gazeta called the torpedo a “robotic mini-submarine”, travelling at 100 knots (185km/h; 115mph), which would “avoid all acoustic tracking devices and other traps”.

We already know that Russia has been building “black hole submarines” that NATO officials admit are undetectable.

So Russia already has the capability to approach our coastlines without us even knowing about it.

But these new nuclear torpedos take the game to an entirely new level.

And of course this is not the only new weapons system that Russia has been developing in anticipation of World War III.  Earlier this year, I discussed several more in an article entitled “The Next-Generation Weapons That Russia Will Use Against The United States In World War III“.

Sadly, the Obama administration seems almost totally oblivious to this threat.  Our strategic nuclear forces are so outdated that floppy disks and rotary phones are still being used, and Barack Obama is fond of saying that “the Cold War’s been over for 20 years“.

Unfortunately for us, the Russians do not see things the same way.  Anti-American sentiment inside Russia is at an all-time high, and every time the U.S. interferes in Syria or Ukraine the Russians get even angrier.

Just like we do, there are “talking heads” on Russian television that tell people what to think.  And many of these “talking heads” on Russian television are openly talking about how war with the United States is inevitable.  These days, the Russians consider themselves to be the great force for good in the world, and they consider America to be the great force for evil in the world.  In fact, one of their most popular talking heads named Alexander Dugin has publicly called the U.S. the “kingdom of the Antichrist”.

And even though the Russian economy has dipped into recession, the Russians continue to feverishly prepare for war.  This year alone, Russian military spending is up 33 percent.

Yes, ISIS is a far greater threat than most Americans would even dare to imagine as I discussed yesterday.  In the times to come, I fully expect to see terror attacks inside this country unlike anything we have ever seen before.

But I am completely convinced that the greater long-term strategic threat is Russia.

The Russians are feverishly preparing for World War III while Barack Obama acts like it could never possibly happen.

Hopefully Obama is right, because if he is wrong the consequences for this nation will be absolutely unthinkable.