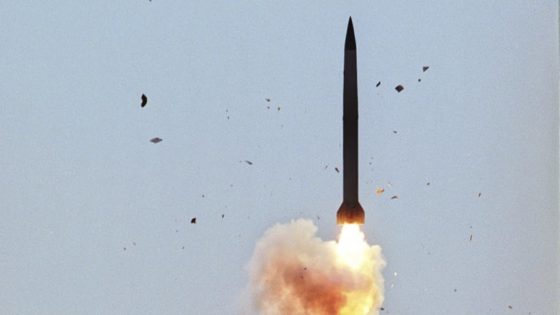 Russian claims the missiles made in the United States were destroyed over the Western part of the former Soviet Union. A barrage of anti-radar HARM projectiles was intercepted mid-air, the Russian Defense Ministry says.

Four US-made AGM-88 HARM aircraft-fired anti-radar missiles have been shot down over Russia’s Belgorod Region, which shares a border with Ukraine, the Russian Defense Ministry reported on Monday. It added that Russian air defenses in the Donetsk and Lugansk People’s Republics and the Zaporozhye Region intercepted six rockets fired by US-made HIMARS launchers and Soviet-designed Uragan systems, according to a report by RT.

This news came after Ukrainian troops shelled the city of Belgorod and other places in the eponymous region on Sunday, killing one person and injuring ten others, according to Governor Vyacheslav Gladkov. He wrote on his Telegram channel that 75 residential and industrial buildings were damaged, as well as around 40 cars.

Gladkov says that the shelling is continuing. So far, the attacks have left around 14,000 residents in the city of Shebekino without power and two more people were wounded overnight.

Belgorod is a frequent target of Ukraine in the ongoing conflict. The region shares a border with Ukraine making it an easier target.

Russian news agency RIA Novosti cited an investigation document on Friday as saying that drones used to attack the country’s Belgorod, Kursk, and Voronezh Regions, as well as Crimea, contained parts manufactured by US firm SpektreWorks.

The United States continues to ramp up its involvement as well. Missiles that are intended for Ukraine will be “targeted” by Russia if the U.S. succeeds at getting them sent over to the country.

Kremlin Says U.S. Missiles Will Be Targeted if They Make It To Ukraine

According to a report by RT, The Times quoted a US defense source last week as saying that the Pentagon quietly greenlit long-range strikes on Russian territory. US Secretary of State Antony Blinken previously maintained that the White House was not encouraging attacks on Russian soil.

If the U.S. is attacking Russia, we all need to be prepared for what comes next. It’s not looking good.