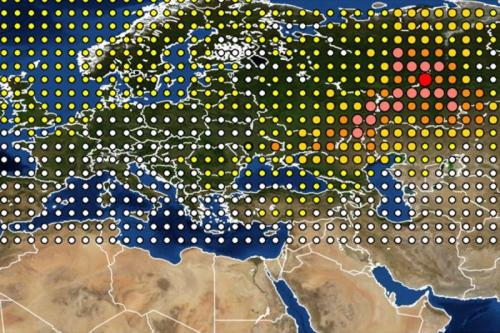 One month after a mysterious radiation cloud was observed over Europe, whose source remained unknown last week speculation emerged that it may have been the result of a “nuclear accident” in Russia or Kazakhstan, on Tuesday Russian authorities confirmed the previous reports of a spike in radioactivity in the air over the Ural Mountains. In a statement, the Russian Meteorological Service said that it recorded the release of Ruthenium-106 in the southern Urals in late September and classified it as “extremely high contamination.”

Earlier this month, France’s nuclear safety agency earlier this month said that it recorded a spike in radioactivity, and said that “the most plausible zone of release” of this radioactive material “lies between the Volga and the Urals” from a suspected accident involving nuclear fuel or the production of radioactive material. The agency noted, however, that it is impossible to determine the exact point of release given the available data. Luckily, it said the release of the isotope Ruthenium-106 posed no health or environmental risks to European countries.

At the time, Russia’s state-controlled Rosatom corporation – the same company implicated in the Uranium One scandal – said in a statement that there had been no radiation leak from its facilities. That changed when the Russian meteorological service (Rosgidromet) reported that it had detected record levels of radiation in the villages located in Russia’s Ural region adjacent to Rosatom’s Mayak plant for spent nuclear fuel. Some calculated that the radiation exposure levels were up to 1,000x higher than the normal rate.

This Part of Russia is Literally Exposed to 1000x the Normal Radiation Rate https://t.co/3YY5fjGM9S pic.twitter.com/AKbOJqUrhh

Mayak, located in the Chelyabinsk region, issued a statement on Tuesday denying it was the source of contamination. The plant said it has not conducted any work on extracting Ruthenium-106 from spent nuclear fuel “for several years.” Full statement below:

“The contamination of the atmosphere with ruthenium-106 isotope registered by Rosgidromet is not linked to the activity of Mayak. The measurements which Rosgidromet has released suggest that the dose people might have received is 20,000 times less than the allowed annual dose and presents no threat at all to health.”

Quoted by Sputnik, the Rosatom representative stated that there were “no incidents or accidents at nuclear facilities in Russia”.

The Mayak nuclear processing plant, located in the Urals, has also come out with a statement saying that “atmospheric pollution with ruthenium-106 that was found by Rosgidromet is not connected to the work of Mayak,” since the work on the separation of ruthenium-106 from spent nuclear fuel (and the production of ionizing radiation sources on its basis) has not been carried out for many years at the facility.

The exact source of the spike, however, remains a mystery, though IRSN suggested that the cause might be an accident.

Mayak has been responsible for at least two of Russia’s biggest radioactive accidents. In 2004 it was confirmed that waste was being dumped in the local river. Nuclear regulators say that no longer happens, but anti-nuclear activists say it’s impossible to tell given the level of state secrecy. Also on Tuesday, Greenpeace said that it would petition the Russian Prosecutor General’s office to investigate “a possible concealment of a radiation accident” and check whether public health was sufficiently protected.