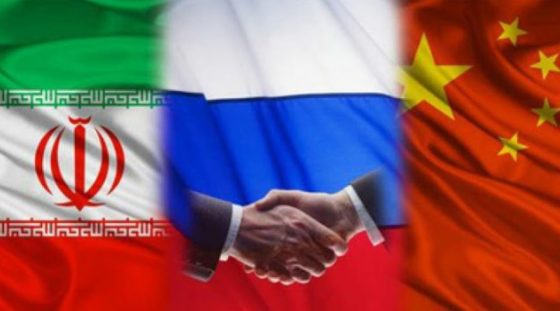 Beijing and Tehran jointly stated that Iran is joining Russia and China for naval drills in the Gulf of Oman. This comes at a time of heightened tensions since the U.S. withdrew from a landmark nuclear deal with Tehran, The Telegraph reported.

The drills are taking place from December 27th to 30th; the military exercises have the goal to “deepen exchange and cooperation between the navies of the three countries,” Chinese defense ministry spokesman Wu Qian told reporters.

Wu further elaborated on the naval exercises – code-named Marine Security Belt – stating the Chinese navy would deploy its Xining guided-missile destroyer nicknamed as the “carrier killer.” However, no details were given on how many ships would take part in the drills.

For Iran, the drill’s purpose is to bolster “international commerce security in the region” and “fighting terrorism and piracy,” according to senior armed forces spokesman Brigadier General Aboldazl Shekarchi. The official added that the display is to ‘show Iran cannot be isolated.’

Eight countries — China, Greece, India, Italy, Japan, South Korea, Taiwan, and Turkey — were initially given six-month reprieves after the United States reimposed sanctions on Iran in November, following President Donald Trump’s decision to withdraw from the 2015 nuclear accord which Activist Post reported. Those reprieves expired on May 2nd according to a Bloomberg report.

China, arguably one of the largest buyers of Iranian oil, reiterated its opposition to unilateral sanctions and accused the U.S. of reaching beyond its jurisdiction. “China’s cooperation with Iran is open, transparent, reasonable and legitimate, and should be respected,” Foreign Ministry spokesman Geng Shuang said in response to a question on the waivers at a briefing in Beijing, CNN reported.

Iran has called the sanctions “illegal” according to a statement by the foreign ministry, Ewn.co.za reported.

“Since the sanctions in question are principally illegal, the Islamic Republic of Iran did not and does not attach any value or credibility to the waivers given to the sanctions,” the foreign ministry said in a statement issued on its official website.

If China does not cut Iran oil purchases to zero, the Trump administration may have to make a decision on blocking Chinese banks from the U.S. financial system. That could have unintended consequences for finance and business between the world’s two biggest economies, already in negotiations over trade disagreements.

U.S. Secretary of State Mike Pompeo has previously warned all countries to reduce their Iranian oil imports to zero in an April 22 statement; Pompeo said no nation would receive any further exemptions or waivers from U.S. sanctions.

China’s foreign minister stated the exercises were part of “normal military cooperation” between three countries. Russian Foreign Minister Sergey Lavrov said, “We, the People’s Republic of China, and Iran are preparing naval drills for fighting terrorists and pirates in this part of the Indian Ocean.” Commenting on the trilateral exercise, Lavrov stated on October 2nd that the exercise will be undertaken to train their forces in anti-piracy and anti-terrorism efforts.

Russia and Iran separately hosted drills earlier this year in the Atlantic that coincided with each other. Iran’s mission was said to have taken five months from March of this year, which means they ended their drills in September. Iran deployed warships as part of the drills; the exact number of ships deployed in both instances was not disclosed, Reuters reported.

Moscow added Kalibr land-attack cruise missiles to both warships and missile submarines that Moscow then used in Atlantic patrols near the United States, Free Beacon reported.

Iran for its part has been getting closer and closer to BRIICS nation member states, such as China and Russia with Chinese media Xinhuanet reporting in 2018 that the country had surpassed 7.4 percent in value in non-oil trade. However, China National Petroleum Corp. recently pulled out of a $5 billion natural-gas project in Iran, Wall Street Journal reported.

Iran has expressed as far back as 2013 that the country was interested in joining the BRIICS coalition which so far only includes Brazil, Russia, India, Indonesia, China, and South Africa.

Last year, Russia held its annual fall military exercises, Vostok-2018, in collaboration with China which was deemed the largest drill in decades.

The two countries joined together for various drills, with 300,000 troops, 1,000 aircraft, 36,000 combat vehicles and as many as 80 ships that were involved, according to Russia’s Defense Ministry. While China had a lesser number of troops on the ground estimated at 3,000 soldiers along with aircraft and helicopters.

The drills took place across five different training areas, as well as the Sea of Japan, the Bering Sea and the Sea of Okhotsk, NPR reported.

Russia has recently displayed its new intercontinental weapon that can fly 27 times the speed of sound  — the Avangard hypersonic glide vehicle —  which Russian President Vladimir Putin has described as a “technological breakthrough comparable to the 1957 Soviet launch of the first satellite.”

China is also actively developing a similar intercontinental missile, according to the Associated Press.

Beyond the development of new weapons, the tensions between the three countries and the U.S. are at a historically high level. China has recently used a coded message to signal that war with the U.S. could be coming for its support of Hong Kong protesters. While Russia has issued very ominous statements over the past year leading many to speculate war is on the horizon, as Activist Post reported.

Further, reports also suggest that both Tehran and Beijing are considering a “long term blueprint of military collaboration.” Meanwhile, India, Russia and China three members of BRIICS are exploring an alternative to the US-dominated SWIFT (Society for Worldwide Interbank Financial Telecommunication) which will allow trade among nations that have sanctions against them by the U.S, Economic Times reported.

As has been reiterated countless times over the last year, those “war drums” seem to be beating louder and louder as we march towards the echoes of the wails of World War Three, and 2020 might just be the decade where everything starts to fall apart diplomatically. So far, things have only escalated to a trade war but next year or the years beyond could certainly get physical. As of January 2019, the “Doomsday Clock” has been set to 2 minutes to midnight, which translates to a very unnerving situation. That’s the same time as last year and remains the closest it’s been since 1953 at the height of the Cold War, USA Today pointed out.