You cannot invade the mainland United States. There would be a rifle behind every blade of grass.

Amid abysmal earnings reports from some of the world’s top companies in recent weeks, Americans may be spending less on things like consumer electronics and dining out, but one trend remains seemingly unstoppable.

We’ve got an insatiable demand for weaponry, with more guns being purchased last year in America than there are active duty military members in the world’s fourteen largest militaries.

Americans like their guns, and according to the latest quarterly revenues from Sturm, Ruger & Co., that isn’t going to change anytime soon. In fact, over the last five years we’ve seen a massive increase in gun buying. So much so that Ruger was forced to suspend new firearms orders earlier this year because they simply could not keep up with demand.

Last quarter, Ruger blew away analysts expectations with sales of $118 million, which amounts to nearly half a billion dollars on an annual basis.

Moreover, what’s impossible to ignore about this trend is what’s behind it.

The single largest determining factor as to why gun sales have surged since early 2008 seems to be a collective fear surrounding the election of a big government anti-gun socialist as the final arbiter and protector of the U.S. Constitution. 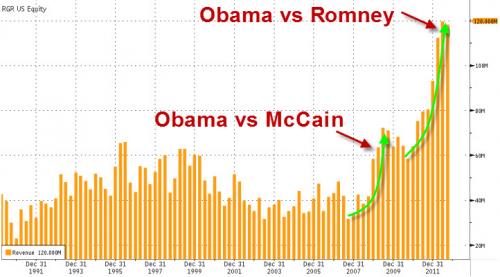 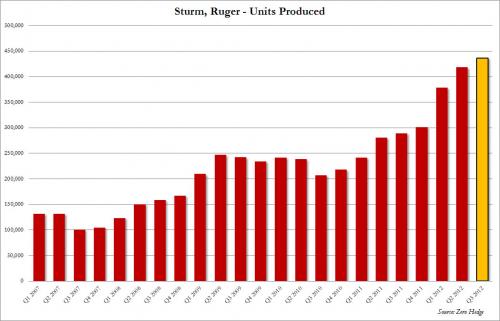