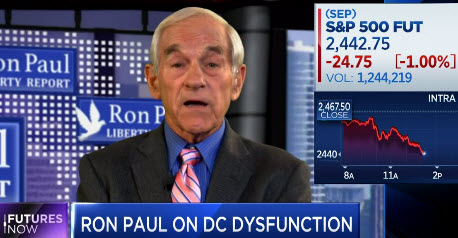 The former Republican Congressman from Texas believes escalating dysfunction in Washington will create even more pain for Wall Street.

“A 50 percent pullback is conceivable…I don’t believe it’s ten years off. I don’t even believe it’s a year off. “

Paul noted that there’s a lot of chaos in Washington right now, with an “unpredictable president” and those who are inclined to “tear him apart” but if the market takes that big of a tumble, he doesn’t see it as Trump’s fault.

“It’s all man-made. It’s not the fault of Donald Trump in the last week.

If the market crashes tomorrow and we have a great depression, he didn’t do it in six months.

It took more like six or ten years to cause all these problems that we’re facing.”

Paul previously argued Wall Street is overestimating the strength of the economy, and the Federal Reserve kept interest rates too low for too long.

He said the situation for stocks could turn ugly as soon as October.

“I see the foundation of our system built on sand, and a big wind comes along to blow it down.”