ROBERT KIYOSAKI: “It’s Not A Free Country Anymore! Pray For The Best-Prepare For The Worst” 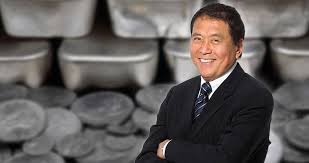 I’ve spent considerable time understanding the whole story behind BILL GATES’ CRAZE with vaccines, and his willingness to be DESPISED and DRAGGED THROUGH THE MUD in his pursuit to mitigate diseases with mass-scaled shots, which are highly CONTROVERSIAL.

The whole thing REEKS OF CORRUPTION to the high heavens, but that’s not the biggest SCANDAL in the medical industry. In fact, the president that is MOST CONNECTED to corruption, Richard Nixon, perpetrated (according to a TOP-LEVEL ADVISOR of his) the worst act of shameless public disinformation policy in U.S. history in 1971, the same year that he RUINED the world’s monetary regime by going off the gold standard.

Literally, Richard Nixon CREATED the most PROFITABLE INVESTMENT OPPORTUNITY of my career: GOLD.

As you can see, right now WALL STREET is so convinced that the markets are staging a BEAR MARKET RALLY that it is actually generating a BUY SIGNAL.

Although the majority of the public has no money involved in it, stock market performance is SUPER-IMPORTANT for CONSUMER CONFIDENCE.

Right now, the general public still has a VERY CONFUSED outlook on the future. There are close to 35 million people who have entered the unemployment pool and several large companies are laying off thousands of workers, perhaps indefinitely.

When the MARCH PANIC took place, the public showed why gold is a CRITICAL ASSET to hold.

Physical gold de-coupled with spot prices on the COMEX and many SEIZED THE MOMENT and sold at wild premiums.

Later on, as the panic cooled off, sellers could have bought back physical coins at much lower prices, as premiums shrunk; there’s NO DOUBT in my mind that gold and silver HAVEN’T SAID their LAST WORD.

In fact, Robert Kiyosaki in a TWEET that has now become famous wrote:

WE JUST interviewed Mr. Kiyosaki and you can CHECK OUT the interview below.

Kiyosaki began the interview saying they (the elitists) used the coronavirus to “coverup the collapse of the shadow banking system.” He adds: “the whole system was designed to bail out the rich. That’s why there’s no financial education at our schools.” Kiyosaki also suggests that he is a little afraid of speaking up right now.  When you cross the global elitists, you are trekking into dangerous territory, as several people have already found out.  “It takes courage to speak out today,” says Kiyosaki.

“The Fed is communism. Anything that’s centrally controlled is socialist or communist. The Fed is run by just a few people…

It’s not a free country anymore…it’s controlled by a cartel.”

Kiyosaki says to bet on gold, silver, and Bitcoin.