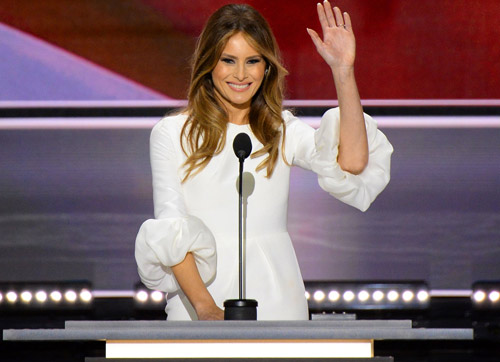 As ridiculous as it may seem that Trump opponents label him a racist for his anti-immigrant views though he has an immigrant wife, the following review from a liberal writer is nothing short of insane.

According to Elizabeth Wellington, an African American writer for The Inquirer Daily News in Philadelphia, the stunning white dress worn by Melania Trump at the Republican National Convention not only made a “scary” statement, but was an aggressive display of racism:

“Trump’s foreignness stands in stark contrast to her husband’s “Make America Safe Again” and “Make America Great Again” sloganeering, which he plans to accomplish with his anti-immigrant, anti-Muslim, anti-Black Lives Matter platform. In other words, anti- all things brown, as some might say.”

“So while Trump appeared flawless on the Cleveland stage Monday night, whether she intended it or not, her all-white ensemble displayed the kind of foreignness that is accepted by her husband’s political party. To many, that outfit could be another reminder that in the G.O.P. white is always right.”

We’re curious how  Ms. Wellington would have reacted had Trump worn a black dress?

Would her unbiased determination then have been that Melania is appropriating black culture?