Ridiculous Claim: Fed Policy Not To Blame For Rising Food and Gas Prices; The Dollar Hasn’t Gone Down

Government mouthpiece and well known Keynesian economist Paul Krugman makes the case for monetary easing and Fed intervention by claiming that the rising cost of food and gas has nothing to do with the Federal Reserve or the free money they’ve dished out to banks, both foreign and domestic, to the tunes of not billions, but tens of trillions of dollars.

The latest economic theory from the Nobel Prize winning economist suggests that the Fed and government intervention couldn’t possibly have anything to do with US dollar depreciation – not for the last hundred years, and certainly not today:

The dollar hasn’t gone down. That’s the amazing thing. If you actually look at the Dollar vs. the Euro, the Dollar vs. the Yen, it has not. In terms of the world’s other major currencies we have not had a big depreciation of the dollar.

History says that a regime of moderate inflation is better for workers than we’ve got now.

Video via The Info Warriors

If we weren’t so opinionated, we’d be speechless.

We present exhibit no. 1 as the only evidence necessary to prove exactly the opposite of Mr. Krugman’s claims: 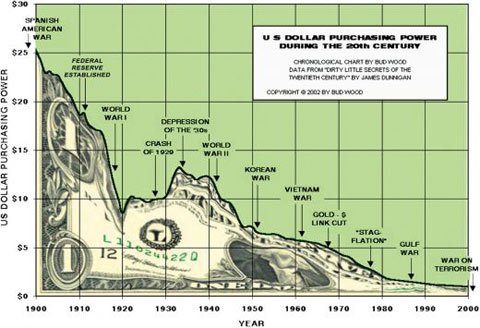 The fact of the matter is that since its very inception the Federal Reserve has played the key role in the destruction of our currency with a dollar today being worth just 5% of what it was in 1913.

Most notably (and we expect to receive our Nobel Prize for Economics nomination in the mail shortly after publishing this groundbreaking work) the US dollars has depreciated against every single physical commodity on the planet for nearly a hundred years. This can only be possible through one economic policy – currency expansion.

The very notion that the US dollar is not depreciating against other currencies, and that this is indicative of a successful monetary policy, is patently ridiculous. The EU, taking the lead from their colleagues in the United States, is printing trillions of Euros to keep the system afloat by slamming it with liquidity. So, in simplistic terms, if we print $10 trillion dollars and the Europeans print the equivalent amount of Euros, we have absolutely no change in our exchange rates, because they both retain the same value against each other as they had before the printing.

Where the value of this central bank toilet paper becomes apparent is not in the exchange markets cited by Mr. Krugman as an indicator of a healthy currency, but rather, in the amount of physical goods that government backed currency can buy.

Easy money (and the fraud that came with it) is to blame for the doubling (and subsequent halving) of home prices from 2001 through today. So, too, can we blame the Federal Reserve for the rising prices of our food, gas and energy.

Does Mr. Krugman actually believe that when you give investment banks around the world tens of trillions of free dollars to invest risk-free into whatever assets they deem appropriate, that they won’t force the prices of these assets through the roof? This is exactly what happened leading up to the 2008 crash, and this is what is happening today. Granted, we have a rise in demand as billions of people in China an India come online in the new global economy, but the majority of the price rises over the last few years have originated from the essentially free money the Fed has given to those specific entitites that actually do have the power to make markets move. By this logic, Mr. Bernanke undeniably has the power to control these prices, as he controls the money supply and the pipelines through which it is distributed.

When you consider that Mr. Krugman is a highly respected and influential economist whose ideas have been accepted and implemented by monetary and government officials without contemplation or discussion, then it becomes apparent how serious of a problem we are facing.

What’s scary is that we don’t think Mr. Krugman is lying to us when he speaks of these ludicrous theories. He , and those who implement these policies, actually believe them as Gospel, and that is much more dangerous.

We suggest that you follow the one investment strategy you need to know to protect yourself against the coming inflation monster and start acquiring physical commodities right now, because these people – these best-and-brightest of our financial and economic world – will not stop until the US dollar, our purchasing power, our retirement savings and our entire way of life are completely wiped out.