Coronavirus is now, QUITE HONESTLY, one of the worst disasters to come upon the human race since WW2. The quantity of casualties worldwide is about 7,000 – which, compared with the 50,000 deaths a day caused by malnutrition, the 400,000 deaths a year caused by smoking, and the hundreds of thousands of deaths every year caused by car accidents and alcoholism, is NOTHING, but the prevention of further spread comes at an unbearable cost to economies.

The real ISSUE in this matter is not that the virus has brought about untold tragedies, but that the LACK OF proper ways of containing the virus do not exist, without MASS-SCALE quarantines and OUTLAWING INTERACTIONS.

The trade-off to eradicating the virus and of limiting the death toll, when it comes to the price paid by the global economy, is that all of our major industries have FLICKED THEIR SWITCHES OFF.

Collectively, as societies, we are SUBJECTING OURSELVES to this crisis, in a financial sense, in order to potentially save many lives. The combination of public fear and of the medical professionals, who DO NOT wish to UNDERSTATE the lethality of Covid-19, has painted us into a corner, along with governors, U.S.-bound, and heads of state, globally, who just WILL NOT risk taking responsibility for this contagious outbreak happening under their watch.

As a global society, we have decided that in the field of pandemics, we hold authorities accountable for coming up with SOLUTIONS and the eyes of the world are on WASHINGTON.

The U.S. economy is, without a doubt, ENTERING an earnings recession with each passing hour. What the Federal Reserve has done, by cutting interest rates to ZERO in a full-on EMERGENCY manner, is to allow credit markets to FUNCTION, since they were PUSHING THE ENVELOPE.

Literally, had the central bank not done this, yesterday we would have seen dollar shortages worldwide. We could have experienced market closures, a bank holiday, lines at the ATMs and curfews, with police patrolling the streets.

The Federal Reserve threw itself on a live grenade to save credit facilitation and bond liquidity but TOOK ITSELF out of the game completely.

They will now be buying bonds and Mortgage-Backed-Securities, an OFFICIAL QE5 program launch, but they will not INTRODUCE negative rates. 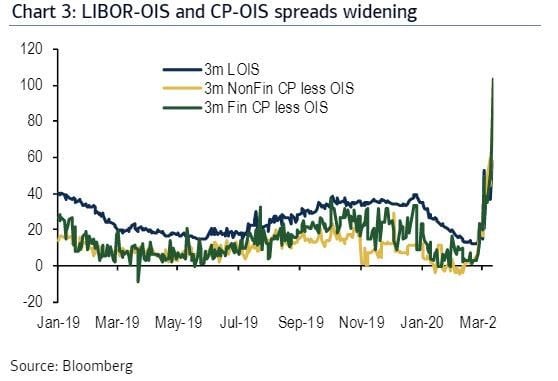 Before the FED intervention, the bond markets were close to SHOUTING MAYDAY. The entire planet wanted dollars and there weren’t enough to go around.

The same goes for physical gold. While the price of paper ETFs is falling, in a couple of days, you will not be able to EASILY get your hands on the real thing. Due to OUTRAGEOUSLY high demand and supply chain constraints, both gold and silver, which have dropped like a rock to the bottom of the ocean on the TOTALLY MANIPULATED paper exchanges, are UNATTAINABLE in material form.

Because the Federal Reserve is wounded and left on the sidelines, I expect the MOTHER OF ALL BAILOUTS to start being deployed by the government and by international organization, which are U.S.-centric, such as the IMF and the World Bank.

This is a global pandemic and, as many have feared, the response will be globally-coordinated, opening the DANGEROUS doors to a one-world currency and global governance STRUCTURE.

Don’t think for a second that power-starved globalist key players aren’t looking to FULLY capitalize on the suffering of others and become their heroes in this time of crisis.

Make no mistake about it: the levels of FEAR on the street are HUMUNGOUS. I surveyed several mentors of mine, who were so bearish that I nearly used it as a CONTRARIAN indicator that the worst is behind us.

What you want to see before making a large allocation is the indication of higher highs. For now, we’ve broken below the December 2018 lows, so the floor is that 1,800-2,200 for the S&P 500, the level it traded when Donald Trump made an upset and won the 2016 presidential elections. 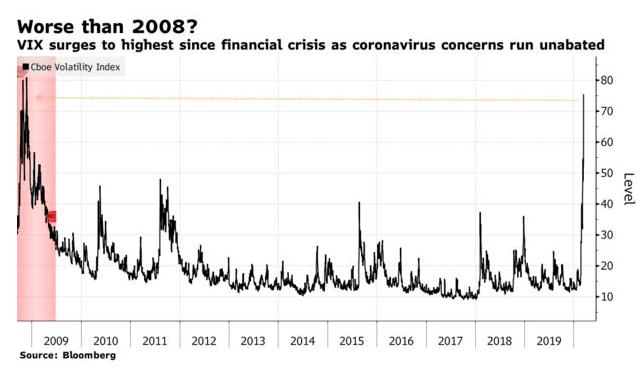 At this point, as you can see, the fear of the public, especially with the PROSPECT of a lawful house curfew, mandated by the federal authorities, is SIGNALING DISTRESS.

Obviously, ZERO interest rates and QE programs are not enough to make investors BELIEVE the crisis has been contained.

In a few days, companies will begin releasing their emergency measures, mostly in the fields of manpower, coupled with the publication of FRESH unemployment numbers and we will need a BILL, signed by the SENATE, which assists the misfortunate.

Nothing else will suffice.

The markets are UTTERLY CONCERNED that after nearly one full term of VERBAL VIOLENCE between the Democrats and the Republicans, they will drag their feet, rather than be one step ahead of the economy, IN UNISON.

By this Friday, we will have an ADEQUATE amount of data and we could, with higher certainty, form a decision on BUYING THE DIP or staying in cash even longer.