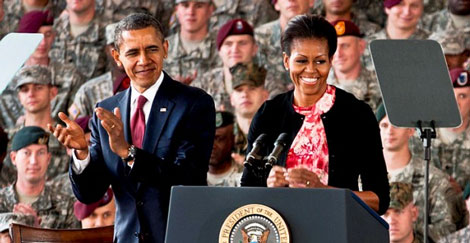 Republican members of Congress are urging military officers to rebel against the Obama administration’s middle eastern foreign policy by resigning “in a blaze of glory,” according to U.S. Rep. Doug Lamborn of Colorado.

During a liberty group forum on Wednesday night in the basement of a Colorado Springs bar, Lamborn, a member of the House Armed Services Committee, answered a question from a member of the audience who urged members of Congress to “support the troops” in the absence of leadership from the White House.

According to Cory Hutchins, who attended the meeting, Lamborn responded by remarking, ““You know what, I can’t add anything to that, but do let me reassure you on this. A lot of us are talking to the generals behind the scenes, saying, ‘Hey, if you disagree with the policy that the White House has given you, let’s have a resignation.’”

The Pentagon failed to respond to Hutchins’ request for a comment, but Democrat Irv Halter, a retired Air Force major general who is running against Lamborn, accused Lamborn of politicizing the military.

“Our elected officials should not be encouraging our military leaders to resign when they have a disagreement over policy,” Halter said in a statement. “Someone who serves on the House Armed Services Committee should know better.”

The notion that Lamborn and other members of Congress are urging military leaders to resign amidst yet another bombing campaign in the middle east is extremely noteworthy given suggestions that ground troops may ultimately be deployed in Syria and Iraq to target ISIS militants.

Rumors of rancor were rife amongst members of the military in opposition to Obama’s derailed plan to attack Syria last year, with many taking to Twitter to express their discontent at the White House’s policy of arming jihadist militants throughout the region.

When both active duty and retired soldiers began posting images on Twitter under the #IdidntJoin hashtag to signal their opposition to fighting on the same side as Al-Qaeda terrorists in order to topple the Assad government in Syria, many quarters of the media attempted to claim that the images were fake or the work of pro-Assad hackers, despite numerous indications to suggest that the pictures were indeed genuine.

View a selection of images posted by active duty soldiers and veterans in opposition to military involvement in Syria from last year below.