In recent years the Federal Emergency Management Agency (FEMA) has been regionalizing disaster supplies and rapidly procuring hundreds of millions of ready-to-eat meals, blankets, and body bags. Coupled with the Department of Homeland Security’s suspiciously massive purchases of ammunition, firearms, and riot gear, it is becoming increasingly clear that the U.S. government is positioning itself in advance of an as of yet unknown widespread calamity.

The stockpiling of supplies often considered prepper staples has been occurring since at least 2008, and has increased in scope and velocity throughout the last several years. In fact, the government has been buying so many supplies and in such large amounts that shortages have affected the world’s leading manufacturers to the point they’ve been forced to suspend shipments to retail customers of survival foods and ammunition.

The efforts to stockpile supplies have not abated, despite the mainstream notion that we are experiencing an economic recovery and that relative peace exists throughout the world. In fact, it seems that FEMA and DHS are increasingly expanding their efforts. As evidenced in the report below, they are no longer just waiting for bids posted on the Federal Business Opportunities web site.

FEMA is now actively engaging businesses on the retail supply level, suggesting that whatever they are preparing for is imminent and may occur in short order:

Via Intellihub.com and My Patriot Supply:

The owner of MyPatriotSupply.com was contacted by the Federal Emergency Management Agency (FEMA) by way of email, leading on that something is ready to pop off.

“Here we are, August 2013 and FEMA once again is trying to buy up large stockpiles of food. And they don’t want anyone to know it, and they want to take immediately delivery… I’ve studied history. That is what got me into preparedness in the first place. History has shown us time after time that those who depend on the government to come to their aid during a disaster are the ones waiting the longest for help. Sometimes help never comes…or comes too late.

I do not believe these critical emergency food supplies should be in the hands of the government, stored in some secret warehouse only to be brought out and distributed to their own agencies first,  with the rest of us getting table scraps long after we need it.

These life-saving meals belong in the hands of people like you and me. This is why I declined the opportunity to sell to the Department of Homeland Security.

But let’s not forget the most important part of this:

Why the sudden sense of urgency? What do they know that we do not?

I’m not one to cry that the sky is always falling, but when DHS/FEMA make a move to quietly buy up emergency food supplies and ask how much we can ship within 24 hours…I think this is far enough outside the realm of what is “normal” to beg some questions.“

A snapshot of the email from FEMA has been made available below: 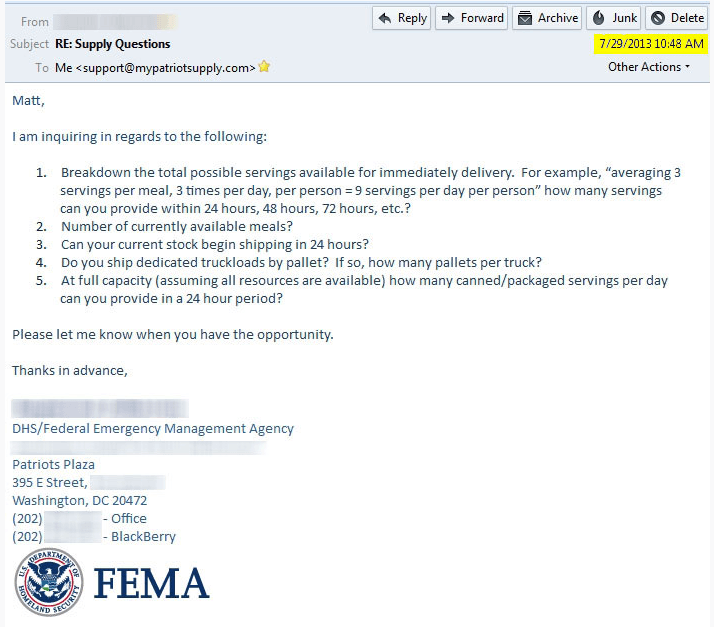 Granted, the Federal Emergency Management Agency is tasked with preparing America for unexpected, widespread emergencies, so having supplies should be their top priority. However, that they would be anxiously contacting retail suppliers of emergency food and equipment is highly suspect.

We know the U.S. government has been actively preparing for and simulating scenarios that include economic collapse and civil unrest with participants including everyone from the Pentagon to hybrid local law enforcement agencies.

For all intents and purposes the government of this country is engaging in activity that is, when applied to individual behavior, considered suspicious terroristic activity. They are doing everything their FBI bulletins say we as individual citizens should be reporting to police, including the bulk purchases of meals-ready-eat, ammunition, high capacity magazines, and firearms.

Though most Americans are ignorant of these facts, many of those who are aware of what the government has been doing dismiss this as completely normal. They believe that, should disaster strike, those supplies are being stockpiled for their benefit, never realizing that they will be the last in line when a true breakdown happens.

When Hurricane Sandy struck the east coast last year tens of thousands of people were left without homes and supplies. Where was FEMA? We’re not sure, but we do know that within 72 hours of the grid being down residents of New York and New Jersey were starving and rummaging through trash looking for scraps of food. Those who were lucky enough to find a FEMA shelter soon found out that the assistance being provided felt more like a concentration camp than a refugee center. We saw similar events unfold in New Orleans after Hurricane Katrina.

The bottom line is that these supplies and the hundreds of billions of dollars being spent by FEMA are not for us. They are being allocated for the elite members of society, not the average American on the ground.

For those who fail to prepare for long-term disaster situations, life will be horrific and unbearable, because, as noted by FEMA itself, government recovery assistance could take weeks or months.

They are preparing. For what? We can only speculate, but the evidence suggests it’s big and involves a potentially long-duration event.

When it hits the fan all bets are off and you’ll have only yourself, those close to you, and your community to keep you alive.