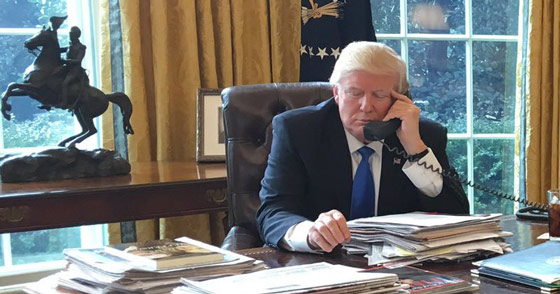 This report was originally published by Clifford Cunningham at Infowars.com

Members of Congress are holding “secret conversations” about removing President Donald Trump from office following a “difficult first 100 days,” according to a report from The New Yorker magazine.

“Nobody occupies the White House without criticism, but Trump is besieged by doubts of a different order, centering on the overt, specific, and, at times, bipartisan discussion of whether he will be engulfed by any one of myriad problems before he has completed even one term in office—and, if he is, how he might be removed,” wrote Evan Osnos.

Osnos claims to have “interviewed several dozen people about the prospects of cutting short Trump’s Presidency,” including “his friends and advisers; to lawmakers and attorneys who have conducted impeachments; to physicians and historians; and to current members of the Senate, the House, and the intelligence services.”

“This is a conversation that people are having around the dinner table, it’s one people have at the office, members of Congress are talking about it in private and the question is very simple: is this a president who is able to do the job and is able to go the distance,” Osnos said on MSNBC’s The Last Word.

Critics of President Trump are actively seeking to remove him from office via impeachment or declaring him mentally or physically unfit for office under the 25th Amendment.

Under Section 4 of the 25th Amendment, a President can be removed from office if he is judged to be “unable to discharge the powers and duties of his office” by the Vice-President and a majority of the Cabinet secretaries or by a congressionally appointed body, such as a panel of medical experts.

Osnos argues the “considerable speculation about Trump’s physical and mental health,” as well as President Trump’s alleged unwillingness to disclose details about his health, could be an effort to cover up a deliberating illness.

After the magazine Fact asked psychiatrists if they thought Barry Goldwater was psychologically fit to be President in 1964, over a thousand called him “warped,” “impulsive,” and a “paranoid schizophrenic.”

Goldwater successfully sued for libel, and in 1973 the American Psychiatric Association created the so-called “Goldwater rule,” which forbade making a diagnosis without an in-person examination and without receiving permission to discuss the findings publicly.

The “Goldwater rule” has been broken repeatedly in regards to President Trump, with nearly 50,000 mental-health professionals signing a petition claiming Trump is “too seriously mentally ill to perform the duties of president and should be removed” under the 25th Amendment.

“Although some of my sources maintained that laws and politics protect the President to a degree that his critics underestimate, others argued that he has already set in motion a process of his undoing,” Osnos claims.

Democratic Senator Mark Warner of Virginia, the ranking Democrat on the Intelligence Committee, privately told friends that he puts the odds at two to one against Trump completing a full term.

William Kristol, an anti-Trump neo-con, argued the chance of Trump being impeached is “somewhere in the big middle ground between a one-per-cent chance and fifty. It’s some per cent. It’s not nothing.”

“I believe that invoking Section 4 of the Twenty-fifth Amendment is no fantasy but an entirely plausible tool—not immediately, but well before 2020,” said Laurence Tribe, a professor of constitutional law at Harvard.