Report: Chance of a Catastrophic Solar Storm Is 1 in 8; Would Take Down Power Grid, Food Transportation, Water Utilities, Financial Systems 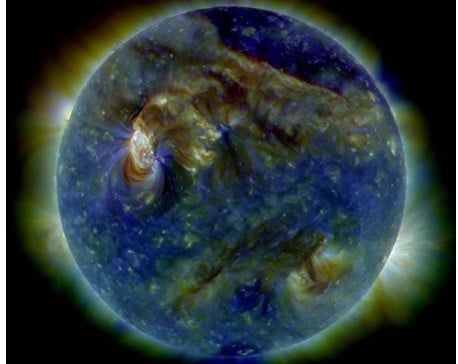 According to a recent study published by Space Weather: The International Journal of Research and Applications,  we have roughly a 12% chance of getting hit with a solar storm so powerful that it could take down the national power grid and yield catastrophic consequences for the general population. Pete Riley, a senior scientist at Predictive Science in San Diego, is the author of the study which looks at the probability of the occurrence of extreme weather events:

Via: On the probability of occurrence of extreme space weather events

By virtue of their rarity, extreme space weather events, such as the Carrington event of 1859, are difficult to study, their rates of occurrence are difficult to estimate, and prediction of a specific future event is virtually impossible. Additionally, events may be extreme relative to one parameter but normal relative to others. In this study, we analyze several measures of the severity of space weather events (flare intensity, coronal mass ejection speeds)…

By showing that the frequency of occurrence scales as an inverse power of the severity of the event, and assuming that this relationship holds at higher magnitudes, we are able to estimate the probability that an event larger than some criteria will occur within a certain interval of time in the future. For example, the probability of another Carrington event occurring within the next decade is ∼12%.

The 1859 Carrington Event, as described by Wired Science, may have been a marvel to observers and caused some setbacks in the developing telegraph infrastructure at the time, but a similar occurrence today could be a global game changer:

At the time of the Carrington Event, telegraph stations caught on fire, their networks experienced major outages and magnetic observatories recorded disturbances in the Earth’s field that were literally off the scale.

In today’s electrically dependent modern world, a similar scale solar storm could have catastrophic consequences. Auroras damage electrical power grids and may contribute to the erosion of oil and gas pipelines. They can disrupt GPS satellites and disturb or even completely black out radio communication on Earth.

During a geomagnetic storm in 1989, for instance, Canada’s Hydro-Quebec power grid collapsed within 90 seconds, leaving millions without power for up to nine hours.

The potential collateral damage in the U.S. of a Carrington-type solar storm might be between $1 trillion and $2 trillion in the first year alone, with full recovery taking an estimated four to 10 years, according to a 2008 report from the National Research Council.

The post-storm effects of such an event are underestimated by the majority of the world’s population, including our political leadership. Like an electro magentic pulse attack, according to the National Research Council a massive enough solar storm could have long term effects that “would likely include, for example, disruption of the transportation, communication, banking, and finance systems, and government services; the breakdown of the distribution of potable water owing to pump failure; and the loss of perishable foods and medications because of lack of refrigeration.”

The worst case scenario has been outlined by the Center for Security Policy, which suggests that an EMP, or a solar storm that results in similar magnetic discharge across the United States, could potentially leave 90% of Americans dead within the first year:

“Within a year of that attack, nine out of 10 Americans would be dead, because we can’t support a population of the present size in urban centers and the like without electricity,” said Frank Gaffney, president of the Center for Security Policy. “And that is exactly what I believe the Iranians are working towards.”

In the documentary Urban Danger, Congressman Roscoe Bartlett warns of the threat posed by a downed power grid and urges his fellow citizens to take action to protect themselves for the inevitable results that would follow:

Source: Congressman Warns: “Those Who Can, Should Move Their Families Out Of the City”

For many, a 1 in 8 chance of a catastrophic event occurring in a decade’s time may be nothing to worry about.

For the emergency, disaster and preparedness minded individual, however, a massive solar storm with the potential to take out our modern day power grid and utility infrastructure  is just one in a variety of potentially catastrophic natural and man-made scenarios that could lead to the collapse of life in America as we know it today.

Though any given event on its own may have a low probability of occurrence, when combined with other potentialities like economic collapse, currency collapse, global or regional military conflict, Super EMP, political destabilization, massive earthquakes (such as on the New Madrid fault), Tsunamis, asteroids, pandemic, and cyber attacks the odds of a game changing paradigm shift in our lifetime’s rise significantly.