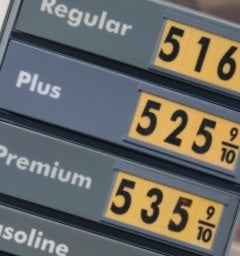 U.S. consumers may be able to ignore continued warnings about economic and political instability by avoiding the news and burying their heads in the sand when water cooler conversations pop up, but what they will not be able to ignore is paying $40 more every time they pump gas into their minivans.

According to oil industry insider and former Shell CEO John Hoffmeister, that’s exactly what we can expect this year.

In an interview with CNBC, Hoffmeister warned that the price of oil will continue to rise amid increasing global demand from emerging economies, tensions in the middle east, and a weakening dollar, causing the price of gas to jump to $5 per gallon before the end of this year:

Get ready to pay $5 a gallon for gasoline this year.

ohn Hofmeister, founder of Citizens for Affordable Energy and the former CEO of Shell Oil’s U.S. operations, warned that there is a “better than 50 percent chance” the price of gas will spike on continued heavy demand in emerging markets and weak public policy at home.

He also sees West Texas crude prices touching “the midteens to $120 a barrel some time this year.”

“What’s really unprecedented is developing countries, particularly China and India, have this insatiable need for more oil and that has not been taken into account when we think of public policy in this country,” he said.

“So while we may be producing a bit more oil in this country, and while demand is down a bit, on a global basis I’m afraid we face a continuing onslaught of prices creeping ever higher,” he said. “I hope I’m wrong on this. I’d love to be wrong on this.”

Some of you may recall what happened the last time gas jumped to all-time highs averaging $4 across the country in the summer of 2008:

Consumers were outraged, and depending on who you asked about the blame for our energy woes, it was the fault of President Bush, democrats in Congress, the Saudis, or environmentalists.

Regardless of the causes, what became clear is that the American consumer could not economically handle gas prices at those levels (even though our European counterparts have been paying at least double that for years).

You may also recall what happened immediately following the $4 top in gasoline prices:

While most Americas have not yet realized the seriousness of our economic crisis, you can be assured that if John Hoffmeister is right there will be an almost immediate effect on discretionary consumption as the prices for everything will jump accordingly.

Suburban commuters who spend two hours a day driving to and from work will see their monthly gas expenditures nearly double, the price of food will rise as a result of increased transportation and delivery costs, and those who are already struggling to make ends meet will be forced to reduce or eliminate spending on essential goods and services.

It may not seem like much at first glance, but $5 gas could very well be the trigger that, like in 2008, turns financial markets and the economy on its head, and sends us into the next major down-wave in this crisis.