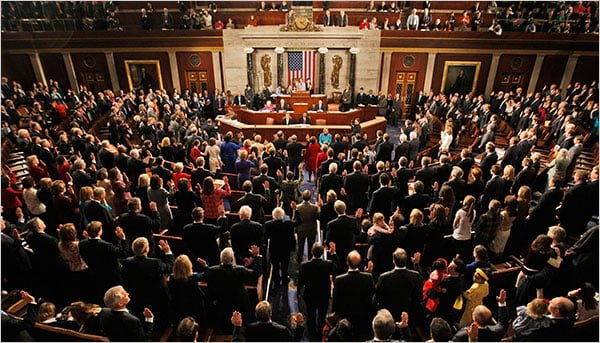 Americans were outraged after our elected representatives in Congress moved forward with over a trillion dollars in emergency bailout funds for banks, investment firms and failing corporations in the midst of the 2008 financial crisis. After tens of thousands of phone calls to the Congressional switchboard, overwhelmingly against the bailout funds, the American public was largely ignored by the majority of their elected representatives, who would eventually saddle taxpayers with a long-term debt in excess of $20 trillion.

In March of 2009, the American public resoundingly rejected the Patient Protection and Affordable Care Act (a.k.a. Obama Care) after it was made known that the bill would mandate, by force if necessary, that every citizen would be required to acquire health insurance. Not only did Congress and the President pass legislation that would, in a supposedly free country, require every American to forcefully pay for a service they may not want, but the more than 1000 page bill was written, introduced and approved before any Senator or Representative had a chance to read it, with Speaker of the House Nancy Pelosi famously saying:

While those laws may be shamelessly contradictory to the fundamental Constitutional law of the land, and as outrageous as it was for Congressional representatives to ignore the American public’s calls to reject the bills, none of those come even remotely close to the most recent transgressions against the people with the passage of the National Defense Authorization Act.

As Americans enjoyed themselves with the holiday shopping season, Congress and the Executive branch worked tirelessly to destroy the 4th and 6th Amendments of the US Constitution, which protect an individual’s natural right “to be secure in their persons, houses, papers, and effects, against unreasonable searches and seizures” and ensure due process with evidence, witnesses, and public trial. The passage of the NDAA has prompted Senator Rand Paul to warn Americans that they could be considered terrorists for seemingly innocent activity and an an op-ed in the New York Times titled Guantanamo Forever? by U.S. Marine generals Charles Krulak and Joseph Hoar argued that the new legislation would essentially nullify aspects of the Constitution, saying “due process would be a thing of the past.”

One thing is clear with the passage of this legislation, and that is those Senators and Congressman who voted for its passage are violating their oaths to support and protect the Constitution of the United States, because everything in the bill is counter to the principles outlined in our founding document. As such, concerned citizens around the country are now actively pursuing grass roots efforts to utilize a never-before enacted power of the people: the recall.

Via The Daily Kos and Sherri Questioning All:

Moving quickly on Christmas Day after the US Senate voted 86 – 14 to pass the National Defense Authorization Act of 2011 (NDAA) which allows for the indefinite military detention of American citizens without charge or trial, Montanans have announced the launch of recall campaigns against Senators Max Baucus and Jonathan Tester, who voted for the bill.

Montana is one of nine states with provisions that say that the right of recall extends to recalling members of its federal congressional delegation, pursuant to Montana Code 2-16-603, on the grounds of physical or mental lack of fitness, incompetence, violation of oath of office, official misconduct, or conviction of certain felony offenses.

While the Montana Constitution (and those of other states) allows for a recall to take place, there is some question about whether these powers, which are technically undefined by the US Constitution, can be used to remove acting Congressional representatives:

The website Ballotpedia.org cites eight other states which allow for the recall of elected federal officials: Arizona, Colorado, Louisiana, Michigan, Nevada, North Dakota, Oregon, and Wisconsin. New Jersey’s federal recall law was struck down when a NJ state judge ruled that “the federal Constitution does not allow states the power to recall U.S. senators,” despite the fact the Constitution explicitly allows, by not disallowing (“prohibited” in the Tenth Amendment,) the states the power to recall US senators and congressmen:

“The powers not…prohibited…are reserved to the States…or to the people.” – Tenth Amendment of the U.S. Constitution.

The issue of federal official recall has never reached the federal courts.

Nonetheless, we may soon find out, as Montana is spearheading the movement to remove both of their Senators from office, as per the petition draft that is now circulating:

“The Sixth Amendment of the U.S. Constitution guarantees all U.S citizens:

“a speedy and public trial, by an impartial jury of the State and district wherein the crime shall have been committed…”

The National Defense Authorization Act of 2011 (NDAA 2011) permanently abolishes the Sixth Amendment right to a jury trial, “for the duration of hostilities” in the War on Terror, which was defined by President George W. Bush as “task which does not end” to a joint session of Congress on September 20, 2001.

Those who voted Aye on December 15th, 2011, Bill of Rights Day, for NDAA 2011 have attempted to grant powers which cannot be granted, which violate both the spirit and the letter of the Constitution and the Declaration of Independence.

The Montana Recall Act stipulates that officials including US senators can only be recalled for physical or mental lack of fitness, incompetence, violation of the oath of office, official misconduct, or conviction of a felony offense. We the undersigned call for a recall election to be held for Senator Max S. Baucus [and Senator Jonathan Tester] and charge that he has violated his oath of office, to protect and defend the United States Constitution.”

While there may be eight other states whose Constitutions allow for the recall of federally elected officials, the US Constitution itself has reserved these rights for the people of each state, suggesting that such a recall movement can gain steam all over the country, and may be our last best hope of restoring Constitutional rule of law to America.