Whether you believe the 7.8% unemployment statistic released by the Bureau of Labor and Statistics two days after the Presidential debate last week are legitimate or not, there are several key data points that suggest our economic situation is continuing to deteriorate.

Putting the jobs report conspiracy aside for a moment,  here’s one particular achievement you can be assured President Obama will not mention in his next debate or campaign commercial:

That data point of course was foodstamps (or the government’s Supplemental Nutrition Assistance Program, aka SNAP), and we are confident that no readers will be surprised to learn that foodstamp usage for both persons and households, has jumped to a new all time record.

At 46,681,833 million the persons hooked on SNAP, the July number crossed the previous record posted a short month before, as the foodstamp curve continues ‘plumbing’ newer and greater heights each month.

More disturbing is that in the same month, the number of US households reliant on foodstamps rose by a whopping 99,493 to 22,541,744. Assuming a modest 2 persons per household, the increase means that more people went on Foodstamps in the month of July than found jobs (181,000 according to the latest revised NFP data). Furthermore, it appears that buying votes has become a tad more expensive in the past month. After the benefit per household dipped to a record low in April at just $275.81, this has since retraced some of its losses and is now at an inflationary $277.92. Oh well: inflation.

Adding the number of disability recipients in the month of July, which in that month rose by 20,474, and one can see why the government is quite happy with dumping this particular release long after everyone was on their way back home for the weekend.

Finally, and putting it all into perspective, since December 2007, or the start of the Great Depression ver 2.0, the number of jobs lost is 4.5 million, while those added to foodstamps and disability rolls, has increased by a unprecedented 21 million.

Oh and about $7 or $8 trillion in debt. Who’s counting really? 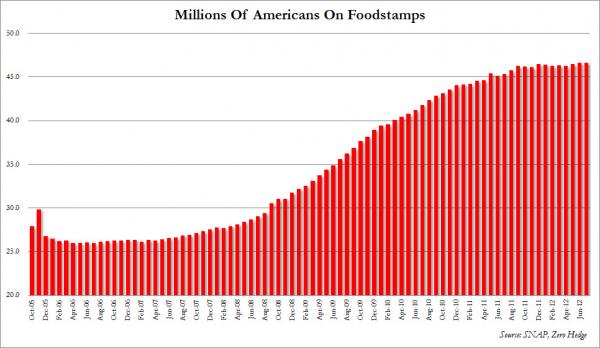 We can pretend that more jobs are being created in this country even though tens of thousands of people each month are no longer counted because they’ve either given up looking for work or their unemployment insurance benefits have expired, but the reality of the situation is that over 99,000 households requested emergency food assistance during the same time period cited by the BLS in its latest report.

Americans are being hit from all sides and it is now having a significant impact on our ability to access the most basic necessities for life – food, energy, and medical care.

What we are witnessing is an irreversible deterioration of our country’s economy in real-time.