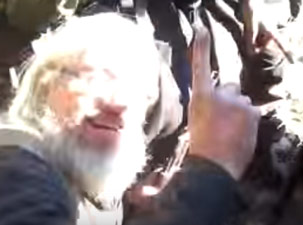 Though details remain murky, a Russian jet has been shot down and both pilots have reportedly been killed. According to Turkish officials, the jet crossed into their airspace and was warned numerous times before being shot-down. Russia says that the jet was over Syrian airspace.

What is clear is that both pilots ejected after their plane was hit. The following video shows rebel forces, presumably from the CIA funded Free Syrian Army, shooting at the pilots as they parachuted back to earth. It appears that both were killed on their descent.

Once on the ground, a second video shows rebels around the body of one of the Russian pilots chanting “Allahu Akbar” – or “God Is Great.”

Today, amid much confusion as to who is on what side and why, NATO-aligned Turkey shot down a Russia military jet over what appears to be contested airspace, as both sides claim they were in the right.

The only question now is how Russia will respond. A direct military action against Turkey is out of the question for one simple reason: an attack on one is an attack on all, according to the NATO charter.

Putin is*****ed off, but there’s really nothing he can do about it.  Turkey is a NATO member, so any sort of military retaliation is off-the-board dangerous for him in that regard, and thus unlikely.

Further, it does appear that the plane not only violated Turkish airspace but ignored warnings to leave.

As with most acts when there’s a war on, the truth is one of the first casualties.  But it makes no sense for Turkey to fire on a plane over Syrian airspace, so at face value this looks like an incursion (whether intentional or not) and, if you fly a military aircraft over someone’s airspace after being warned not to, and Turkey has made clear that this is unacceptable to them, you get the consequences up the ‘chute.

This will be an interesting diplomatic kerfluffle but I doubt it amounts to anything in terms of military or strategic importance.

Russia has two options. Either they strike back at Turkey and risk a confrontation with NATO allies. Or, as Denninger notes, they back off for now. The most likely outcome is the latter, but we can fully expect that Vladimir Putin will ramp up military engagements against Syrian rebels, including the Free Syrian Army going forward.

These are indeed the opening salvos of the next great war, but it may be months or years before the powder keg is finally detonated and all hell breaks loose.