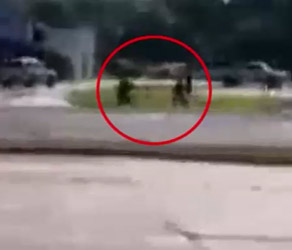 Earlier this year an elite special forces insider warned of serious civil unrest this summer. It appears those predictions were quite prescient.

The war on the streets of America continues.

UPDATE: Police say three officers have been killed. One gunman has been killed but police say a second gunman has barricaded himself into a building. Police are looking for a third suspect.

Witnesses reported seeing a sus[icious man with an “assault rifle” walking down a Baton Rouge, Louisiana street when they called police. As officers approached the individual he reportedly opened fire, killing at least three and injuring up to 7 others.

The gunman has reportedly been killed by police, though the area remains an active scene as more information becomes available.

Raw Footage of the shooting – multiple gunshots in rapid succession can be heard near the end of the video: