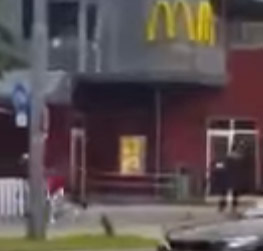 Another week… another terrorist attack in Europe.

It is literally becoming a weekly event throughout the region.

Up until last year, this was never an issue.

Can anyone guess what has changed?

The footage below shows the gunman (police report there may be more than one) standing outside of a McDonald’s restaurant. Shoppers are walking by going about their business when the man draws his weapon and opens fire.

Video: The Moment Truck Slams Into Crowd In Nice, France