Racial Violence Likely In South Africa: ‘We Will Take The Land BY FORCE’ 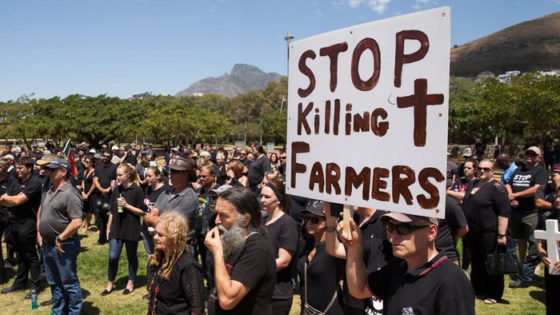 The new legislation allowing the South African government to seize the land of white farmers without compensation, is currently on hold pending review.  However, should the law pass, the country will most likely be flung into racial violence as supporters and those in opposition to the law are split – down racial lines.

It certainly seems like the South African government wants a violent and bloody race war.  The law which would allow the government to take white farmers land by force and redistribute it to the black population was proposed by the ruling African National Congress (ANC) as early as 2015 and supported by President Cyril Ramaphosa according to RT.  More than twenty years after abolishing apartheid (strict racial segregation) the government and those willing to steal the land from others view it as “racial” justice. That is likely to fan the flames of a violent race war.

The proposed land reform has pitted radical groups among black South Africans ready to take land by force against white farmers who are ready to protect their property with an equal amount of force. “We will take the land by force,” Peter Seolela, a member of the Economic Freedom Fighters party, told London-based television channel ITV. “We will not be embarrassed by this. It is our land and we want it now.”

But the white farmers have already paid for the land and many have titles in their hands, meaning it doesn’t actually belong to others just because they want it and based solely on skin color (that’s pretty much the definition of racism). “This land is bought and paid for. I have the title deeds that go back four generations,” said Bernadette Hall, whose husband was reportedly murdered by armed raiders six years ago, according to RT.  “I lost my husband and now they want to take my farm,” Hall told the media. “I’ve put my blood and my sweat and everything into this. They might as well slit my throat and have done with it.”

But some aren’t willing to just give up. Some white farmers have taken to learning self-defense from Israeli Defense Forces in order to combat the threats and violence against them.

The self-defense system is called Krav Maga, which was developed for the Israel Defense Forces. Abolnik has now brought it to South Africa to help with those who are suffering racial oppression under an authoritarian government. “It’s open to everyone and anyone who wants a specially designed system for farmers. We train them to deal with a variety of different attacks,“ Abolnik told South Africa’s News24 TV channel. “We teach them hand-to-hand combat, bush warfare, semi-bush warfare, urban warfare and how to collect information.” The program costs about R20 000 per person (about $1,500) for an intensive two-week course. –SHTFPlan

Earlier this week, the ANC said the land reform bill had been withdrawn by the Portfolio Committee on Public Works pending further study. But the racist authoritarian tyrants ruling over the country reiterated the government’s commitment to pursue the controversial land theft program.