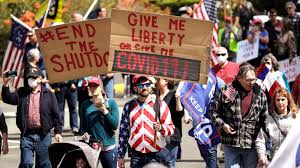 Protests around the country are growing as Americans push back against the tyranny forced upon them by state and federal governments. With the protests gaining steam, it’s important to understand what should next: massive civil disobedience.

By civil disobedience, I mean, open your business without any tyrants permission. Don’t use violence and social unrest. Once people begin to disobey the authoritarian lockdown orders peacefully and start to reopen their businesses, the power structure will quickly erode under the feet of the government and elitists and flow back to the people.  Protesting is begging the government to allow people to be free. Civil disobedience is when people finally figure out they don’t need anyone’s permission to reopen their business. Refrain from any and all violence, and just reopen your business. The decision is not in the tyrants’ hands any longer.

Could It Be True? Will We Be Free? MSM & Governments Will FAIL This Time, IF I Can Help It!

Fox Business reported that the protests are growing quickly to the government’s response to the coronavirus pandemic.

Tennessee and Arizona became the 19th and 20th states to see demonstrations against shelter-in-place orders in response to the coronavirus, as a group gathered to wave American flags and hold signs in Nashville Sunday while others protested in cars near the state capitol building in Phoenix.

More rallies are scheduled this week in states including Missouri, Pennsylvania and Maine. –Fox Business

The economic damage done by tyrannically locking people down over an outbreak will be difficult for at least half of Americans in the coming year. We can help by frequenting businesses that open up and disobey the order to stay closed. We should all be standing up for each other to not only take back the economy, but also take back our power from the authoritarians who think they own us, and help those who decided they own themselves. Once people figure it out, and it’ll be soon, the government will lose more power than they ever hoped to gain by putting most of the United States on house arrest.

The government ruined people’s lives and made working and making a living illegal, which is enough reason to disobey their commands. They will enslave us to the point that we allow. It’s time to disobey. The truth is we should have disobeyed from the beginning.

What all these governments fear, is people coming together and realizing we can do this on our own, and we don’t need their permission, and we won’t follow their orders any longer.

Massive protests are a good sign, but disobeying will be even better.  Stay peaceful and let’s help each other through this.  The lives of those who are losing everything to these lockdowns matter just as much as those who died of the virus. Stay moral, and disobey tyrants. Let them be on the wrong side of history. Humanity is awakening to their own enslavement, and this time, the elitists and governments have finally pushed people too far.

When people shift from begging the government to let them make a living to just doing it anyway, we will see the power begin to return to the people. They have as much power as you let them have. They are amassing more while people beg. It’s time to stop begging and start living again.