Patriot Dawn – The Resistance Rises: “The Government of the United States of America Was No Longer an ‘Administration’; It Was A Totalitarian Regime.”

The following excerpt appears in the new book Patriot Dawn – The Resistance Rises, by Max Velocity. Max has served in both, the British and the U.S. armies, and also as a high threat security contractor. He has served on six military operational deployments, including to Afghanistan immediately post-9/11, and additionally he spent five years serving as a security contractor in both Iraq and Afghanistan. During his career in the British Army he served with British SOF (The Parachute Regiment), to include a role training and selecting recruits for the Regiment. More recently, he has served in a Combat Medic and Civil Affairs role in the US Army Reserves. He is the author of two previous books: Contact! A Tactical Manual for Post Collapse Survival  and Rapid Fire! Tactics for High Threat, Protection and Combat Operations.

His latest book, Patriot Dawn – The Resistance Rises, is a step away from the user friendly tactical manuals he is known for, and combines the excitement of an action-packed fictional novel with real-world battle hardened experience in offensive, defensive and counter-insurgency strategies and tactics.

The United States has descended into Civil War. The storm was rising for some time, a Resistance in the hearts of American Patriots to the strangulation of liberty by creeping authoritarianism. The scene was set. It just took a little push.

A terrorist attack on the United States leads to war with Iran, followed by collapse, as the economy goes over the cliff. The final blow is a widespread opportunistic Chinese cyber attack, taking down the North American Power Grid.

From the ashes, the Regime emerges. Liberty is dead. What remains of the United States of America is polarized.

Jack Berenger is a former Army Ranger Captain, living in northern Virginia with his family. Following the collapse, they fall foul of Regime violence and evacuate to the farm of an old Army friend. Jack is recruited into the resistance, to train the fledgling forces in the Shenandoah Valley. The fight begins. Resist.

The following excerpt appears in the prologue of Patriot Dawn – The Resistance Rises and takes place just after a large-scale terrorist attack on Washington D.C. 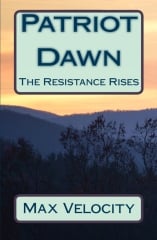 The terrorist attackers were reported to have been recruited, abetted, directed and sponsored by Iran, although the details were unclear and it appeared that an investigation was not the top priority of the Administration.

How had the terrorists managed to charter this plane, which had apparently originated in Dubai on a one stop flight to the US, loading it with two hundred heavily armed fighters, without alerting any suspicion?

However, the focus following the attack was not international but domestic, and the priority was the ‘safety and security’ of the public by the accelerated implementation of the massive domestic surveillance and policing drive.

Fear was paramount and the masses were even more convinced that giving up their freedom and rights was in their best interests for their ‘safety and security’. Many internet bloggers and alternative media sites were describing the attack as a ‘False Flag’, abetted by the ‘Powers That Be’, but those crackpots were soon shut down by the Department of Homeland Security, in order to prevent further ‘panic mongering’.

The attack also provided the justification for war against Iran. However, that war was prosecuted by the Administration in the form of a primarily naval and air campaign that limited the involvement of ground troops.

This limitation allowed for the deployment of troops as convenient to the agenda of the Administration and the military-industrial complex, but ensured that sufficient active duty units remained available for domestic operations.

The attack on Iran was however the final straw that preceded the total meltdown of the Middle East.

As part of the 2012 National Defense Authorization Act, measures were in place to allow Posse Comitatus laws to be ignored domestically. This was activated by executive order and active duty and reserve U.S. Army units were used to reinforce the National Guard in operations against domestic terrorists and sleeper cells.

The terrorist attack had precipitated the final mortal blow to liberty and the destruction of the United States of America as a Constitutional Republic. It was true that the erosion of liberty and the Bill of Rights had been going on for some time; the Constitution was viewed by many as a dead document, and the measures had already been put in place for the implementation of a state of emergency.

The attack had been a terrible thing, but at the same time it was so convenient to the agenda of the Administration. Everything since the attack had been the death rattle of liberty as the police surveillance state was fully imposed.

Due process and Habeus Corpus were suspended, and the NDAA allowed arrest and internment without probable cause or trial on the simple suspicion by the authorities that someone posed a terrorist threat; a system that was easily abused.

Everything in society was now centered on compliance and obedience to authority. Questioning of the orders of those in authority positions was not tolerated. America was no longer the land of the free, but anyone with a mind had seen that coming for a long time.

Anyone with ideas counter to the official line, or who argued or challenged authority, was labeled a ‘domestic terrorist’, arrested and interned in ‘corrective and reeducation facilities’.

Following the activation of the NDAA by Executive Order, a state of emergency was implemented. It was necessary, because another terrorist attack could happen at any time, and anyone could be a terrorist. There was a lot of talk about sleeper cells and many citizens were arrested and interned without trial. ‘Extremist terrorist’ organizations, including Patriot and conservative organizations such as the Tea Party, were outlawed.

It wasn’t really clear to the general public exactly what happened next, given that they only got their information from the Administration via the heavily state directed mainstream media, and the internet was now under heavy lockdown. However, the economic dangers that had been looming and fueled by the continuous policy of ‘Quantitive Easing’, or money printing by the Federal Reserve, finally came home to roost.

The economy went over the cliff. There was much discussion that the actual precipitator of the plunge was the cabal of bankers who were the real power behind the Regime; they had pulled the financial plug, causing a massive run on the banks and hyperinflation, just like they had done in 1929 to cause the Great Depression. But who really knew, given the lockdown?

The effect was ultimately to cripple the economy, destroying the middle classes. What better way to turn the screws of citizen compliance when so many were now reliant on entitlement handouts?

The ‘progressive’ agenda of collective socialism was nearing its ultimate fulfillment; coerced redistribution of wealth, except now no-one was generating any wealth to feed the monster of the dependent welfare classes.

Statist authoritarian big central government was the order of the day, even though those policies spelled the death of the country. Many ‘progressives’ yearned for that, so that the ‘United Socialist States of America’ could rise from the ashes.

The government of the United States of America was no longer an ‘Administration’; it was a totalitarian Regime.

Order your copy of Patriot Dawn – The Resistance Rises at Amazon.com or Create Space