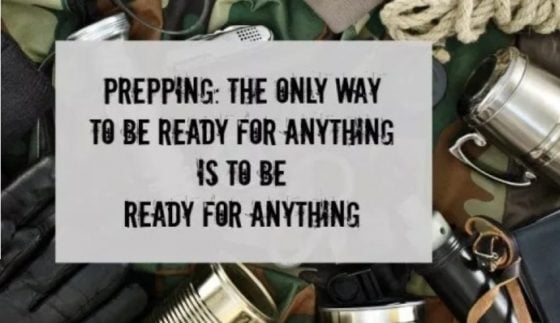 Most of the time, no one actually expects the S to HTF on that particular day.

Most folks don’t go through their lives expecting one specific disastrous event to occur, and then have it unfold according to a predetermined script.

Several years ago, I didn’t get up in the morning expecting some jerk to get mad at his girlfriend, light a tree in her yard on fire, and set off a 100,000-acre forest fire. But he did.

People don’t go to work, expecting to sit down at their desks and grab another cup of coffee, only to find the company filed bankruptcy at midnight the night before. But it happens.

The folks in West Virginia didn’t expect that a container would leak deadly chemicals into the municipal water supply. But it did.

Residents of Haiti weren’t expecting it the day an earthquake leveled most of the homes on the island. But they still found themselves homeless.

Some disasters we can expect. If we live on the coast and there’s a hurricane warning, we know that we either need to evacuate or batten down the hatches and ride out the storm. We are usually aware if war is brewing. Often, we suspect we’re on thin ice in the workplace long before the pink slip arrives on our desk.

But most disasters are a complete surprise, either in their suddenness or an unexpected intensity. We can’t prep specifically for every single eventuality, but that doesn’t mean we must face challenges unprepared. By combining adaptability with general preparation, we can be ready for whatever life throws our way.

If you’re a fan of shows like Doomsday Preppers, or a reader of some disaster-specific websites, you may feel that to be truly prepared, you must have preparations specific to given disasters. Maybe you live near a nuclear facility, so you worry about a disaster at the plant. Perhaps you live in an area prone to earthquakes. It could be your deepest concern is the economy, a potential catastrophic pole shift, or jihad on our shores. And you get ready with this disaster in mind.

While it’s important to prep for threats specific to your geographical location, if you’re only prepping for one disaster, you’re not truly prepared.

A few years ago I was interviewed on the awesome radio show, The Liberty Brothers, regarding my family’s experience during the King Fire. Jim asked me to share what I’d done specifically to prep for forest fires, considering I live on the edge of thousands of acres of national forest. I thought about it for a moment, and then I realized…

I couldn’t actually answer his question.

Nothing in my preps was specific to the threat of wildfire.

At first, in light of that question, I thought, well, duh. I should have been specifically ready for this. Fail!

But then I thought about it a little bit more. We were ready. There are only a couple of minor changes that we’ve made to our preparedness plan in hindsight of this situation.

The key to true preparedness isn’t to be ready for one thing.

It’s to be ready for anything.

How can you be ready for anything?

Teaching someone to be ready for anything would take an entire book. (And there is one, as a matter of fact – it’s called The Prepper’s Blueprint

But here’s the Cliff Notes version. You have to prioritize your most vital needs and prepare accordingly. Here are the most important ways to be ready for anything – everything you do on top of this is just extra protection for your family.

Be prepared to bug out. There is a wide variety of reasons you might need to suddenly leave your home: wildfires, industrial accidents, and hurricanes, to name a few. Many evacuations allow you 5 minutes to gather what you need and go. If you can do it in 3 minutes, you’re that much further ahead of the others in your area. Here are two different takes on the bug out bag: Ready Nutrition and Graywolf Survival.

Be prepared to live without power. After a devastating storm or another natural disaster, it can sometimes take several weeks to restore power to everyone. You should be ready for this by figuring out secondary cooking, heating and light plans ahead of time. Preparations for climate will vary based on your location and the season, but you want to be able to maintain a survivable temperature, at the very least. Much preferable to “survivable” is a plan that keeps you warm and cozy. Here’s a guide to prepping for a two-week power outage.

Be prepared to live without potable running water. The aftermath of many different disasters is made worse by the fact that public utilities are also affected. When we lived in our cabin, our well pump ran on electricity, so any power outage also meant that we had no running water. Not only this, but there have been several examples over the past few years of exactly how vulnerable our water supply is. Residents of West Virginia were without water for weeks after a chemical spill, and more recently, Toledo, Ohio had to ban public water usage when algae bloom occurred in the public water supply. Earlier this year, it was reported that millions of gallons of contaminated water tainted with arsenic, lead, and other toxic metals flow into streams and ponds in certain regions of the US every day. You should have a water plan, including a back-up supply of drinking water, as well as a way to harvest and purify water. As well, you need to have some back-up sanitation solutions.

Be prepared for financial emergencies.  In our current economic climate, a personal financial disaster is on the horizon for many families. You need to build an emergency fund to help prepare for life without a steady paycheck or for unexpected, but necessary, expenses that crop up.  Build a pantry of food

and supplies that can be relied on during difficult times.  This means that you’ll have to spend less on those items, freeing up your savings for things like keeping a roof over your head or keeping the utilities on.

Be prepared to live without going to the store. Many events cause a breakdown in services.  Perhaps supplies can’t get through because of a natural disaster. Maybe the power is out for a long period of time and purchases can’t be made electronically. If a pandemic were to break out, you might need to isolate your family to keep them safe from illness. Whatever the reason, you should have enough supplies that you can hunker down in your home for at least a month, if not longer. Stock up on food, first aid supplies, over-the-counter remedies, health and beauty aids, and pet supplies to see you through until business is once again restored.

Be prepared to defend your family and property. Violence and crime often follow in the footsteps of a disaster. Who can forget the photos of looters carrying televisions through the floodwaters of Hurricane Katrina? During the civil unrest in Ferguson, Missouri, the only businesses that were not looted were the ones from which the owners stood armed and ready to defend their property. Depending on the situation and the desperation level, property crimes can quickly turn into violent crimes. Make a plan for defending your family. If you’re armed, go to the range and practice, practice, practice. Secure your home and make it less appealing to criminals with layers of protection.

Obviously, this is very general and you’re going to want to go more in-depth with each of these preparations. The list isn’t meant to include every single possibility.  It’s important to research your area and identify specific threats. However, by creating a broad base of preparedness, you’ll find that you are well-equipped to handle nearly any trouble that man or Mother Nature sends your way.

Here are some books to get you started:

And some disaster specific books:

Ebola Survival Handbook: A Collection of Tips, Strategies, and Supply Lists From Some of the World’s Best Preparedness Professionals

The Prepper’s Financial Guide: Strategies to Invest, Stockpile and Build Security for Today and the Post-Collapse Marketplace