The following article has been contributed by Tess Pennington of Ready Nutrition.

Editor’s Note: With the onset of hurricane season, preparedness planning for those on the Gulf Coast should be a priority. This year, however, mass evacuations may be much more likely than in previous years because of the BP oil leak. There is much speculation about the possibility of toxic rains, oil infused storm surge and noxious air if a hurricane were to hit US shores. Federal and State governments have failed to be honest with the American people about the BP oil leak thus far, so we don’t expect them to be forthcoming about the dangers that a so-called “Oilcane” may bring until it is too late. We fully expect that any mandatory evacuations will lead to complete pandemonium in target communities as people panic about not just the hurricane, but the health hazards associated with the oil and dispersants in the water. Being prepared and ready to initiate your evacuation plan as soon as a hurricane’s path targets your community will get you out ahead of the crowd. One additional consideration to make this year is that oil hurricane stricken areas may be deemed unlivable by the Federal Emergency Management Agency, meaning that you may not be able to return home for weeks or months. While we hope this possibility is unlikely, take appropriate measures to plan for this worst-case scenario, as well. 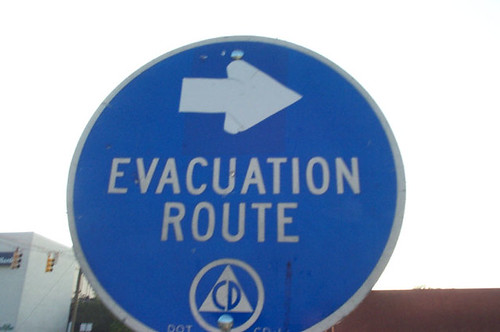 BP, the government and the people of this nation have run out of time.Â  The media blackouts cannot erase the proof ofÂ oil tides and dead carcassesÂ washing up onÂ the coast of the SouthernÂ Gulf States.Â  Many are beginning to call this a modern day â€œBlack Death.â€Â  There is no quick fix for this diabolical mess and no amount of money can be thrown at the problemÂ toÂ wish it away.Â  Letâ€™s examine what we do know: the waters are toxic, the air is toxic, the rains are toxic,Â and soon the water sources will become toxic (We will not even go into the speculation that the methane in the water could cause an exponential explosion, thus creating a tsunami).

According to an OilPrice.com article, emergency planners are dealing with a prospective â€œdead zoneâ€ within a 200 mile radius from the Deepwater Horizon disaster datum in the Gulf.Â  Therefore, mass mandatory evacuations are being planned by government agencies.

The article indicates that government insiders are suggesting that â€œplans are being put in place for the mandatory evacuation of New Orleans, Baton Rouge, Mandeville, Hammond, Houma, Belle Chase, Chalmette, Slidell, Biloxi, Gulfport, Pensacola, Hattiesburg, Mobile, Bay Minette, Fort Walton Beach, Panama City, Crestview, and Pascagoula â€¦ The toxic rain from the Gulf is expected to poison fresh water reservoirs and lakes, streams, and rivers, which will also have a disastrous impact on agriculture and livestock, as well as drinking water, in the affected region.â€

The mass exodus and relocation of millions of families will happen.Â  Itâ€™s just a matter of when and where these displaced citizens will go.

Wake Up and Be Prepared to Evacuate

Evacuating a Community â€“ With the threat of thousands of communities being displaced, there will be widespread chaos.Â Â If a mandatory evacuation is announced, theÂ faster a personÂ begins traveling to their destination the better chance of dodging traffic and anyÂ unnecessary stressful situations.Â  If a person can evacuate before a mandatory evacuation has been announced, the better off they will be.

To expedite the process of preparing for a mandatory evacuation: