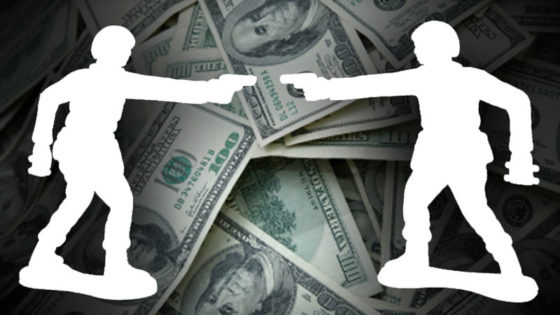 Many times comments have been written about how the site should be tailored more toward subjects entailing preparing and survival. Indeed, all of the Independent Media is “guilty” of reporting news and current events…political matters, politicians, what they said, what they did, ad infinitum. At times it may seem almost a “tabloid,” and may seem to bear no focus upon survival subjects, prepping, and so forth.

That is the furthest thing from the truth.

From the micro-anthropological standpoint, man is (most of the time) very little better than an ape: he kills, steals, eats, lies…will rip his neighbor to shreds or denounce him to pursue his own agenda. There is a conflict in every human heart, and no human being is beyond the ability to follow such behaviors [as Val Kilmer’s “Doc Holliday” termed them] outlined: “very cosmopolitan,” so to speak.

This concept is important to understand, because the same organisms as you and I…that sweat, eat, and lust after money, property, sex, and power…these same hunter-gatherer-killers…have their fingers or lips close to mechanisms that launch nuclear weapons and send out troops to die.

All masking the true reasons for the “crusade,” that fall under one of the aforementioned categories, or others. Such as a diplomatic consular outpost of the United States and its ambassador and staff coming under attack with no response, no reprisal. This is why it is critical to watch the news and see what these (mis)representatives of the world’s governments are doing and saying. Sift it for the relevant facts, and we step into the next points: predictive probabilities and possibilities.

We have a midterm election coming up in just a few days. This midterm election can go either way: Republicans hold the Houses of Congress, or the Democrats take even one of them. In the latter case, the President becomes a paper tiger for the rest of the term…and then must use Executive Orders to pass anything he needs. I wrote about this before the election of 2016, and after the President was inaugurated. I also wrote that the election on November 2 will chart the course for the remaining two years for him. One of those years is shot, as he will have to campaign, probably against Hillary Clinton. Just the very idea is the second most boring and redundant thing for any voter…right up there with seeing “Ron Paul for President” bumper stickers.

As most of the readers here have pointed out (correctly, I might add), preparatory functions such as gathering supplies, and training are functions that are continuous. Never mind the politicos: there are natural disasters, such as flood, fire, earthquakes, and hurricanes to prepare for. The point to be stressed here is you can take the human element of the politicos…weigh what is happening around them and in the world…and see how they line up the chess pieces before it happens.

Probability assessments involve gauging the percent chance that something will happen: civil war/rioting, racial discord (already at an all-time high), and internal collapse. It falls in line with a deliberate decision-making matrix, but where you list all of the variables. Take the figurehead/the “one man/Messianic” model we follow. You can see the amount of consternation and trouble being “stirred up” and gauge this as to whether or not the leader will do something to take the public mind (for what it is) and distract it from what is actually occurring.

Bush Jr. did this with the invasion of Iraq in ‘03, throwing people into a “Stay the Course!” mentality…plus a little help from John Edwards…to defeat Kerry/Mr. Heinz. Now we have a “caravan of love” heading toward the United States. In addition to the 5,000 troops being sent there and what appears to be solidarity between the President, the DHS, and the military to keep them out, be aware: there have been movements of artillery pieces and armored vehicles to the border as well. Go onto Hal Turner’s site for film and photos of this.

The United States is currently in a very precarious position. The Chinese and the Russians have openly stated (through government representatives) that they are preparing for war. Check out this one article released by unz.com entitled “A Senior Russian Diplomat Confirms: “Russia Is Preparing for War” – Is Anybody Listening?” published on 11/2/18. That diplomat is none other than Andrei Belousov, a deputy director in the Russian Foreign Ministry. Look up his bio. Moscow University grad of 1981: Hardcore Communist, sharp, young, and one of Putin’s advisers…akin to most of his staff, not afraid to take chances. Here’s an excerpt for you:

Andrei Belousov, deputy director of the Russian Foreign Ministry’s Department of Nonproliferation and Arms Control, has recently made an important statement which I shall quote in full and then provide a translation.

This is the kind of statement that should receive attention when pooled with the activities around the world (Russian troop movements out of Kaliningrad, and Vladimir Putin’s recent statements about being ready to engage in war) amount to something. If it is possible you should prepare for it. If it is probable? You will only know that by gauging the events around you…sifting through the relevant information and using what you think you need…matching it with what you know, and what you can do about it.

Potential “tipping points” can be gauged and (if not “predicted”) then forecast fairly accurately. One of those points may manifest itself on Tuesday, November 6 on this midterm election. A time of tumult and a time of vulnerability are the perfect moments for an enemy to attack or a domestic insurrection/civil war to begin. One more piece from that article for your perusal:

It is, therefore, crucial to fully realize that Russian official and diplomats carefully measure every word they say and that when they repeat over and over again that Russia is ready for war, they actually and truly mean it!

Gauge all of the resources at your disposal, and watch the leadership and politicians. Watch what they do…unscheduled “vacations” or “sessions” outside of D.C., and listen to the rhetoric…because it may not just be figurative rhetoric…it might be literal and a Freudian slip released it. Forecast and prepare for what is possible and make adjustments for the probable. If it doesn’t happen? No harm done. It is better to prepare and be “wrong” about something happening 100 times than to not prepare for the one time that something comes to pass. I leave you with this for your reflection regarding the politicos, and bid you to stay in that good fight…by staying aware, vigilant, and acting on facts and on your gut instincts:

(Richard Nixon, during the time of consideration for impeachment hearings, stated to Sen. Alan Cranston, D-CA):  “At any moment, I could go into the other room and press a button and 20 minutes later 60 million people would be dead,” after referring to his position as President and maintaining world peace being more important than any “little burglary” at Watergate.”

Punch Line: This was released to the public in February of 1976 by the L.A. Times…two years after the impeachment proceedings, and a year and a half after Nixon resigned.